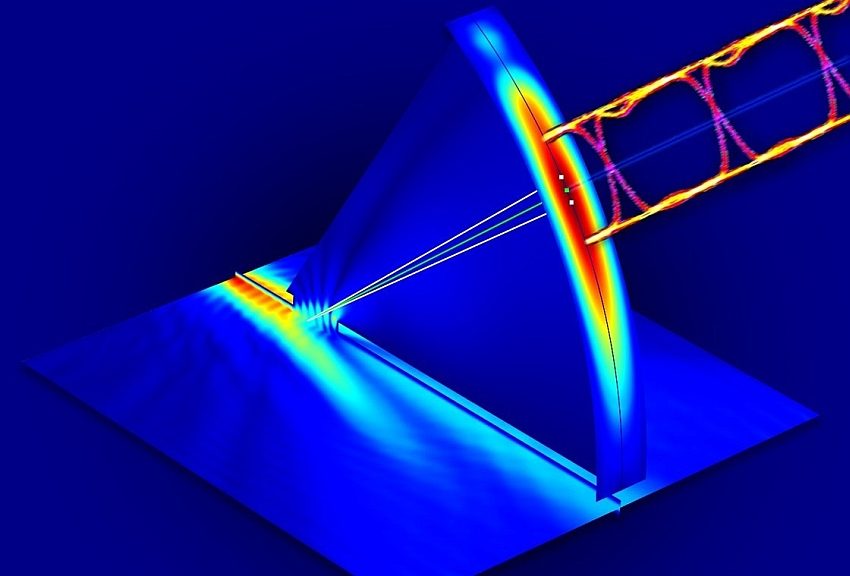 With demand for wireless data transmission speeds and capacities growing beyond what microwave signals can carry, the search is on for ways to use higher frequency THz waves that have a much larger capacity to carry data. One of the teams leading the way is an international collaboration between Brown University and the Institut d’Electronique de Microélectronique et de Nanotechnologie (IEMN), CNRS/University of Lille, in France.

This team has previously shown that the worlds of fiber optics and radio can be bridged using photonic-based THz circuits to achieve high-data rates. However, for any system to be viable, a system for multiplexing and demultiplexing (mux/demux) signals is a fundamental requirement. Using a waveguide system involving two metal plates in parallel, the researchers encoded two high-definition television broadcasts onto terahertz waves of two different frequencies: 264.7 GHz and 322.5 GHz. They then sent both frequencies together into the multiplexer system, with a television receiver set to detect the signals as they emerged from the device. Further experiments show that this system could deliver data rates up to 50 Gb/s with low error rates.

The experiments in the demonstration employed QPSK modulation. For these, the optical signal was modulated using a dual-nested Mach-Zender modulator before a photomixing process generated the dual THz signals. Two Tektronix AWG70000 Series arbitrary waveform generators were then used to create two baseband non-return-to-zero (NRZ) data signals for the in-phase and quadrature data flows.

For detection, the dual frequency THz signal was down-converted in a Schottky-based sub-harmonic mixer to below 40 GHz. The output was then amplified and detected by a Tektronix DPO70000SX 70 GHz oscilloscope. The two QPSK signals corresponding to the down-converted THz channels were further analyzed to recover the modulated data and the corresponding constellation diagrams.

“What this demonstration definitely showed is that a THz multiplexing system can be used to carry actual data without the streams interfering with each other,” said Guillaume Ducournau, an assistant professor at IEMN. “With support from Tektronix, we were able to fully test and characterize our system and the results show that this approach could lead to future commercial application of THz wireless networks.”