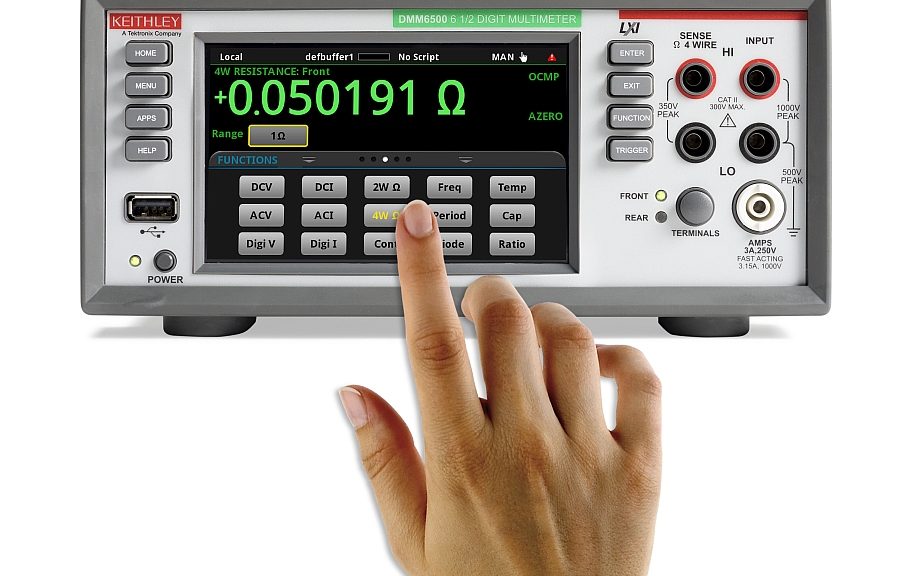 Keithley DMM6500 6½ digit multimeter features a 5″ (12.7 cm) touch screen for graphical curve display, pinch-zoom touch actions, cursor positioning and statistical data display. Cursors are used to characterize measurements with statistical data such as peaks, mean, minimum values and standard deviation on parts or all of a waveform. Up to 7 million readings can be stored in the digital multimeter.

For Mike Flaherty, general manager of Keithley’s product line at Tektronix, « gone are the days when engineers were forced to struggle with complex or congested user interfaces simply because they were engineers and could finally get away with it. By offering instruments that simplify what is complex, they can focus on what is really important rather than spending time understanding how their measurement tools are used. »

The 6 ½ digits DMM6500 supports 15 types of measurements, including capacitance, digitization of voltage or current waveforms and temperature with thermocouples, thermistors and resistance temperature detectors (RTDs). Waveforms and transients can be captured with the 16-bit digitizer at a rate of 1 MS/s.

If multiple channels are required, an optional 10 channels scan board or 9 channels temperature board can be installed on the back of the instrument.

The multimeter is equipped as standard with LAN/LXI and USB-TMC (USB Test & Measurement Class) interfaces and can optionally be equipped with six programmable digital I/O lines and GPIB, RS-232 and TSP-LINK interfaces.

The Test Script Software (TSP) allows the DMM6500 to execute a test with limited PC intervention. The number of control communications between the PC and the instrument is reduced to a minimum. The DMM6500 can then perform custom operations and its display can be adapted to specific needs to provide instructions to the operator, for example.