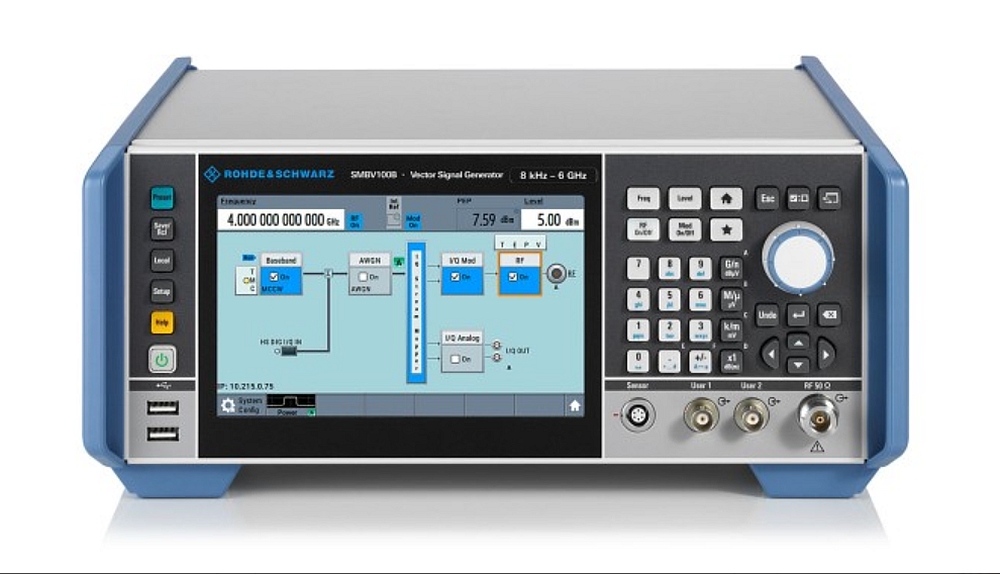 The R&S SMBV100B vector signal generator, integrated in a compact 3/4 19″ housing, is equipped with a touch screen from which all the settings of the signals to be generated can be made via menus, graphs and function blocks. The waveform of the generated signal is also displayed on this color screen.

Several frequency ranges are available, ranging from 8 kHz to 3 GHz and 6 GHz. Frequency coverage can be extended by software key after purchase to ensure that they can be adapted to the evolution of test applications.

This flexibility is also available in terms of RF output power and baseband width. Three distinct specified power levels are available: from -127 dBm to 18 dBm, 22 dBm and 25 dBm. However, the generator is able to provide up to +34 dBm of output power (at a carrier frequency of 1 GHz) without an external amplifier.

The R&S SMBV100B can be configured as required according to three baseband widths, with a flatness of 0.1dB, for the generation of vector modulated signals: 120 MHz, 240 MHz and 500 MHz

Many options are available to configure signals according to the main digital communication standards (5G, cellular IoT, LTE, WLAN IEEE 802.11a/b/g/g/n/ac/ax and Bluetooth 5.0). Signals specific to the specifications of these standards can thus be generated by the instrument without requiring an external PC. In particular, it is possible to configure OFDM signals according to customized specifications.

The R&S SMBV100B offers envelope tracking and digital predistortion (DPD) functions that were previously only available on the high-end R&S SMW200A model.

Signals with a bandwidth of up to 2 GHz can be modulated via external I/Q inputs. Internally generated 160 MHz IEEE 802.11ac WLAN signals have a measured EVM of -49 dB. Broadband signals benefit from the generator’s I/Q modulation frequency response of 0.1 dB (measured) over the entire 500 MHz bandwidth.

One option, for example, offers the possibility of correcting the frequency response using the S parameters of the system to be compensated.

In addition, the R&S LegacyPro tool allows the SMBV100B generator to emulate existing generators from suppliers such as Keysight, Agilent, HP, Aeroflex, Anritsu and Rohde & Schwarz, in order to deploy the SMBV100B in existing automatic test systems without major software modifications.

New options for signal generation specific to geolocation and aeronautics applications will be proposed by the end of 2018.