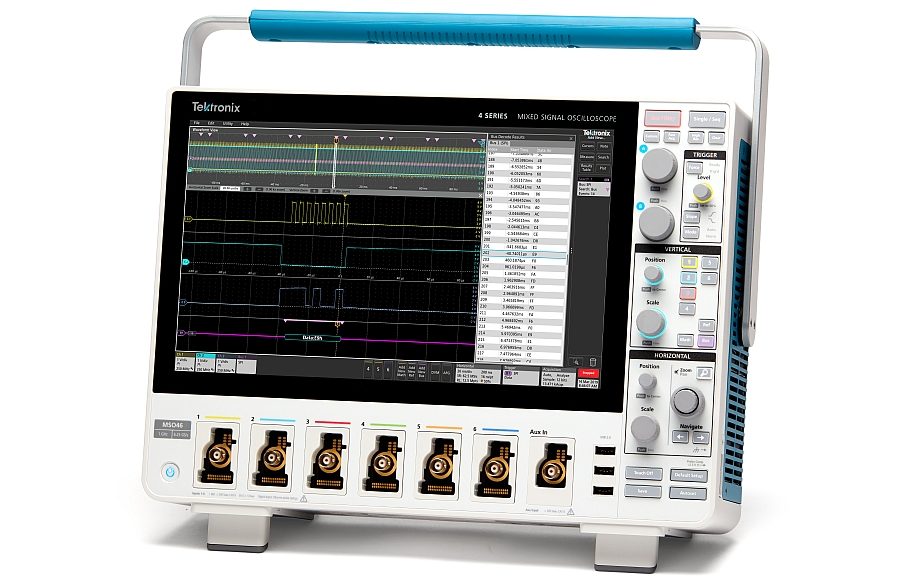 The signals are sampled, via a 12-bit analog-to-digital resolution conversion system, at a frequency of 6.25 GS/s on all analog and digital channels, and recorded on a 31.25 Mpts depth memory as standard and up to 62.5 Mpts as an option.

The new Spectrum View feature enables time-correlated frequency domain analysis with independent spectrum monitoring. “With this option, it is possible to display on the screen the waveforms as a function of time of six analogue signals as well as simultaneously the spectrum of each of them,” asserts Bruno Morin, Sales Director France, Iberia and MEA. “This functionality is achieved by combining software and hardware technologies, including an embedded down converter circuit,” said Brian Ice, general manager of Tektronix’ mainstream oscilloscopes.

Serial bus decoding and analysis options are also available as well as a set of equipment power analysis functions such as voltage switching systems or inverters.

The 4 Series MSO oscilloscopes integrate the TekVPI probe interface, which offers the ability to use the full range of Tektronix differential voltage probes, active voltage and current probes, as well as optically isolated power rail probes and differential probes.

The 4 Series MSOs are available from €7,190 with a standard three-year warranty and passive probes. To preserve customer investment, bandwidths and some options are nevertheless upgradeable after the instrument is acquired.