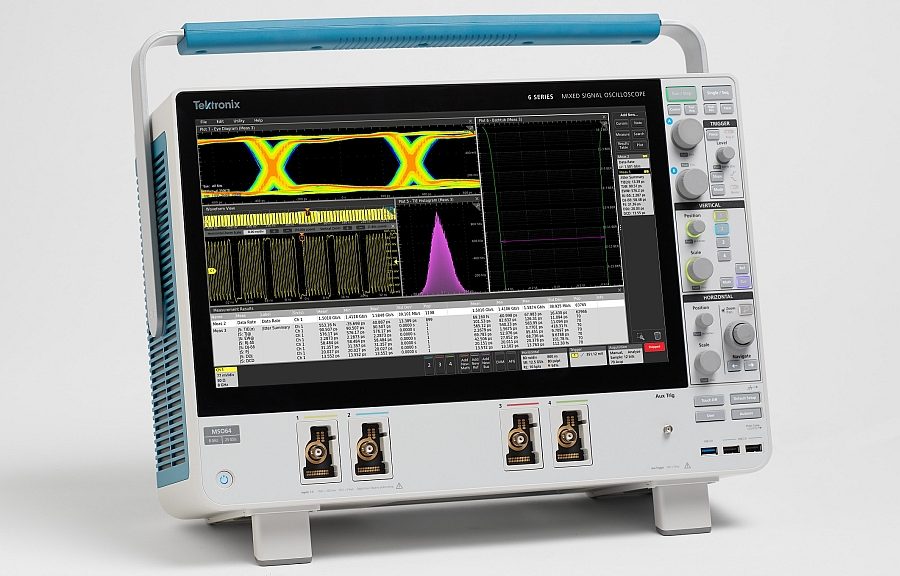 These instruments use Tektronix’s own technology which, according to the American manufacturer, offers a low noise level, especially at the highest sensitivity settings (typical RMS noise: 104µV, 4 GHz, 50Ω, 1mV/div).

According to Tektronix, with a sampling rate of 25 GS/s on all channels, designers can now view up to four high-speed signals very accurately at the same time. For example, a DDR3 clock and three DDR3 data channels can be viewed and analyzed simultaneously.

Based on the same platform as the MSO 5 Series, 6 Series oscilloscopes are scalable in terms of bandwidth and functionality. They offer a variety of tools and features offered by their 5 Series predecessors such as 15.6-inch capacitive touch screen user interface, FlexChannel inputs, and 12-bit ADC resolution. The Windows 10 operating system is available as an option via an integrated SSD disk drive.

Like the MSO 5 Series oscilloscopes, the TLP058 logic probe transforms any of the instrument’s four FlexChannel inputs into 8 digital inputs. This allows up to 32 digital inputs to be combined on the same platform.
At the maximum sampling rate of 25 GS/s the signals are digitized at 8 bits and 12 bits at 12.5 GS/s. A high resolution mode allows 16-bit signal sampling at 200 MHz.

Tektronix also announces a new trigger mode. Named Visal Trigger, this allows you to draw graphic areas on the screen corresponding to the areas around the signals to be triggered (or not triggered). Standard shapes (rectangle, triangle, trapezoid and hexagon) or custom shapes can be drawn.

# Features available on both platforms :

Tektronix also launches a range of probes adapted to the performance levels of MSO 6 Series oscilloscopes. The TriMode TDP7700 has a bandwidth of 4, 6 or 8 GHz. TriMode probes allow common mode, differential and asymmetric signal measurements for high-speed bus analysis, without moving or changing probes. These probes utilize TekFlex connector technology that places active connectors at the end of the probe for optimal signal fidelity while limiting mechanical stress on very small test points, and supports various methods of connectivity to the device under test, including soldering tips, direct connection or freehand probing.

The TAP4000 and TDP4000 probes complete the range of active, respectively asymmetric and differential probes, supporting up to 4 GHz of bandwidth.

# Main features of the MSO 6 Series from Tektronix :