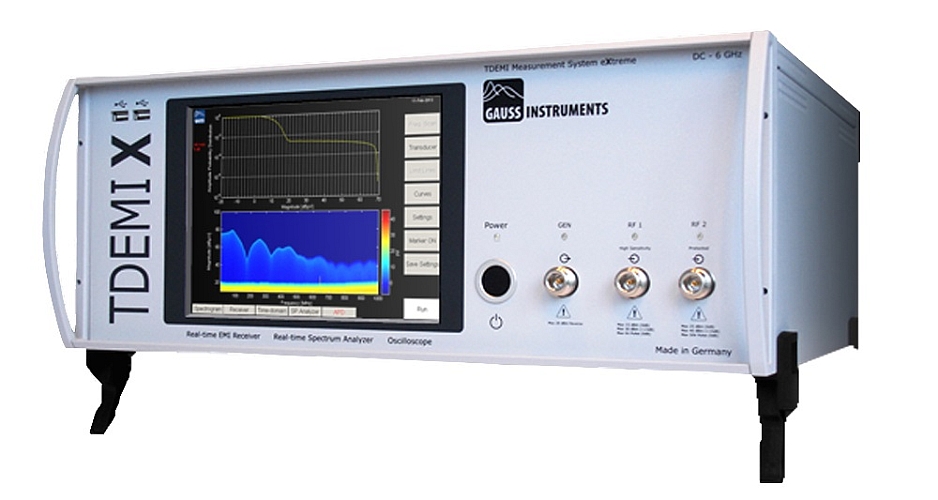 Gauss Instruments offers a new real-time scanning function (QCDSP-UG option, UFSPA-UG) for TDEMI X EMC receivers whereby the emission measurements can be carried out in real time, according to the manufacturer, at all frequencies simultaneously and in a single step from 1 GHz to 18 GHz.

Emissions measurements of the electrical field strength in the frequency range of 1 GHz to 40 GHz are carried out in an anechoic chamber or at an open area test site. Usually these measurements are very time-consuming as the points of maximum radiation have to be found over all angular positions of the device under test (DUT) as well as over all antenna heights.

DUTs with strongly directed radiation patern above 1 GHz require high angular resolution, which means very small angular steps of the turntable to get the accurate position of the maximum emission, making the testing procedure even more time-consuming.

Gauss instruments introduces a real-time scanning feature (Option QCDSP-UG, UFSPA-UG) for its TDEMI X test receiver. With this feature, the final maximization can be performed at all frequencies simultaneously in just one step. By the newly designed hardware module, such measurements across several Gigahertzs can be performed in the real-time spectrum analyzer mode. In the frequency range from 1 GHz to 18 GHz all frequency points can be measured with the needed resolution in time and the result can be maximized instantaneously.

During the test, the DUT is rotated in just one continuous movement and the angular position as well as the maximum level of emission is recorded by the instrument.

The evaluation against the limit lines as well as the documentation and reporting of the measurements are performed fully automated by the integrated report generator module and stored as MS-Word document. By an optional remote control software it is also possible to automate such measurements including controlling turntable and antenna mast and to create test reports including radiation patterns of your DUTs. 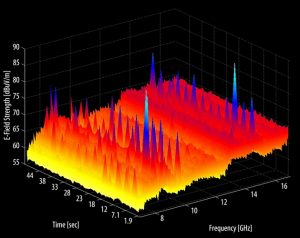 Real-time measurement of a microwave oven up to 18 GHz