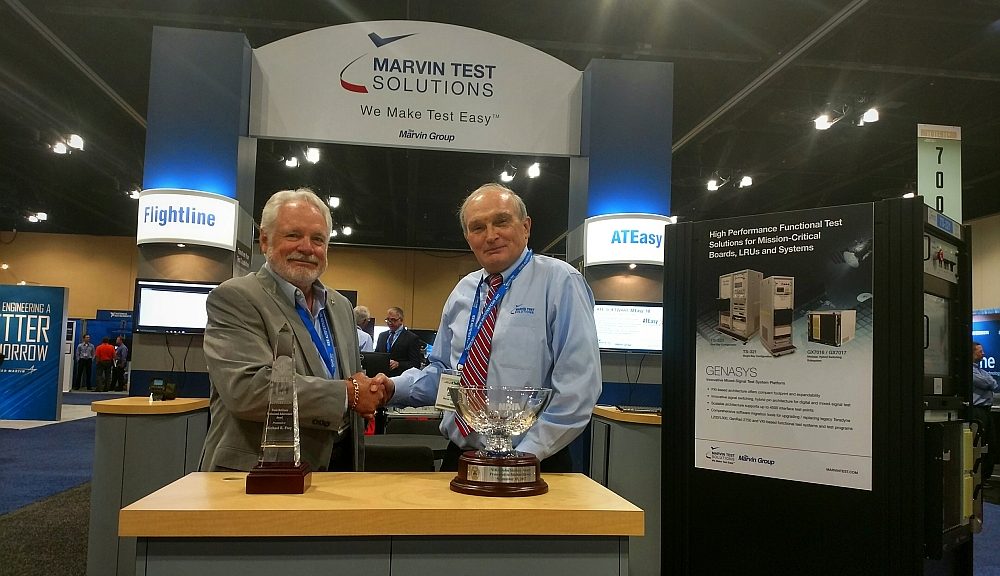 The Slattery award honors the memory of John Slattery, an engineer with the General Dynamics Electronics Division and Former Chairman of the MATE Users Group Control and Support Software Committee. It is presented annually to recognize an individual who best characterizes John Slattery’s contributions to the industry, including technical excellence, innovation, and professional contributions to the advancement of the industry, as well as his peers and colleagues.

The Frank McGinnis Award is presented to recognize a career of outstanding leadership, professional management, individual initiative and technical contributions in automated test engineering, as well as active participation in Autotestcon.

Dewey has been an innovator in automatic test technology and instrumentation for over 30 years. He has led engineering innovations in the areas of VXI and PXI for many key companies in the ATE Industry, including GenRad, Teradyne and Marvin Test Solutions (formerly Geotest) and is one of the few people who were instrumental in the creation and development of both card modular, industry standards. His extensive and direct involvement with key ATE industry players and DoD customers has established Dewey as a critical resource for current and new technology innovations.

Frey has been a key member of the ATE community for nearly 4 decades, starting with an AF flying career in FB-111A, KC-135, and OV-10A, and holds the distinction of being the first B-1B Avionics Squadron Commander. He was instrumental in bringing B-1B to IOC (Initial Operational Capability) in 1986. In his post-flying Air Force career, he served as Maintenance Supervisor of the largest Integrated Avionics Test facility at Plattsburgh AFB, then as Director of Logistics for B-1B Depot Activation OC-ALC, concluding with 28 years of ATE management and business development working for ATS/ATE organizations including General Dynamics Electronics Division, BAE Systems, Lockheed Martin, EADS North America, and Marvin Test Solutions.

Frey is also an active member of the NDIA Automatic Test Committee and was USAF Liaison for over 18 years.