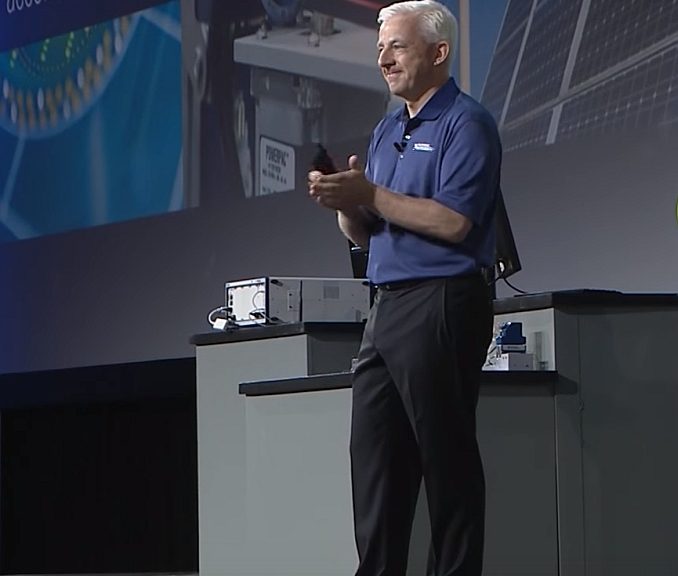 NIWeek is the annual event that National Instruments organizes each year on its Texas lands. Many of its partners are invited. This event is an opportunity for the company to present its new products, the evolution of its technologies and to unveil some projects.

Since its first edition in 1995, this event was held in Austin in early August. The 2017 edition may mark the start of a new era initiated at the beginning of the year by the appointment of Alex Davern as CEO of the company (photo above). Davern replaced James Truchard, co-founder of the firm he had been in charge for 40 years.

Alex Davern in a brief speech to launch the 2017 edition of NIWeek did not fail to pay tribute to James Truchard by recalling its decisive role in the development of National Instruments and a large number of test and measurement technologies now widely used in industry. James Truchard, who was present in the audience, was applauded for a long time and did not hide his emotion by this mark of recognition of his clients and partners. 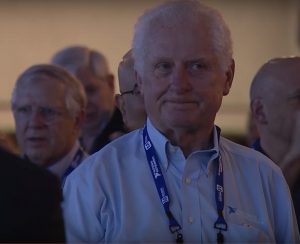 Finally, Alex Davern recalled the vocation of NI: to equip engineers and scientists with systems that accelerate productivity, innovation and discovery. He also stressed that all of its solutions are based on a single platform approach within an ecosystem involving partners concerned with both software and hardware. The new CEO soon gave the floor to its colleagues with more technical profiles for the announcement of the four main innovations of the 2017 NIWeek vintage. 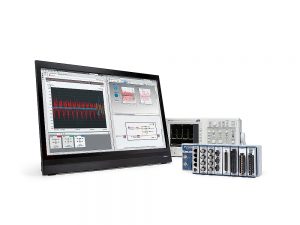 Over the last few years, NIWeek was an opportunity for National Instruments to unveil the LabVIEW version of the year with new features. The company does not break with its habits. But while LabVIEW 2017 is focused on developing, deploying, and managing large, sophisticated, distributed and embedded applications, it announces LabVIEW NXG 1.0, the first release of LabVIEW new generation.

According to NI, “LabVIEW NXG bridges the gap between configurational and custom programming languages ​​by offering a new approach to measurement automation that allows users to focus on their scientific and technical issues rather than configuration of their tools. A new development flow makes it possible to acquire and analyze measurement data without programming.

Configurable rack mounts are rack-mounting solutions for the design of modular test systems designed to reduce the risks associated with integration and to limit the development time of automated test systems. These 19-inch racks are available in several formats of different heights and offer power profiles that can be adapted to the needs of applications and site topography. Safety devices such as thermal protection shutdown, emergency stop and uninterruptible power supplies can be integrated. 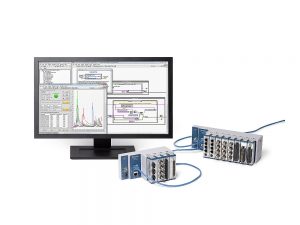 Rugged cDAQ-9185 and cDAQ-9189 chassis with 4 and 8 slots complete the CompactDAQ time-based time synchronization capability platform based on Time Sensitive Networking (TSN) technology, the evolution of the Ethernet standard IEEE 802.1, to ensure distributed time synchronization, low latency and the convergence of standard and critical network traffic. These chassis can be used in distributed test and measurement applications.

– Software radio in the 28 GHz band 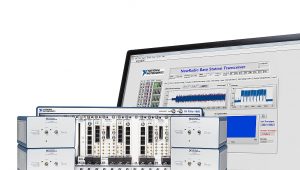 The mmRH-3642, mmRH-3652 and mmRH-3602 radio heads are intended for use with the mmWave Transceiver System modular test solution, which allows PXI instrumentation to transmit and receive signals in a frequency range around 28 GHz. According to National Instruments, this solution is the first transceiver available “on-the-shelf”. It transmits and / or receives signals up to 2 GHz of real-time bandwidth and operates in the spectrum ranging from 27.5 to 29.5 GHz. The mmWave Transceiver System software defined radio (SDR) and its associated software provide a test and measurement solution in the field of next generation mobile telecommunications research according to 5G specifications of Verizon and 3GPP.