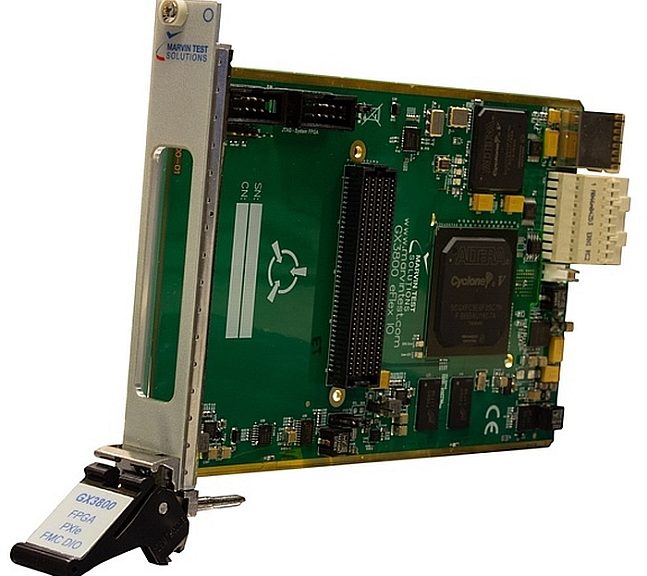 It is possible to integrate a user-specific interface module or any other on-the-shelve FMC module. This makes it possible to design an instrument specifically adapted to an analog or digital test application.

Almost all FPGAs rely on external devices or physical interfaces (PHY) to exchange with their external environment or the unit under test. This extends the FPGA’s limited input/output capabilities: most often mainly digital and very few, if any, analog.

The implementation of these physical interfaces generally requires the use of external interface cards that are adapted to the specificities of the supplier’s FPGA module.

The FMC (FPGA Mezzanine Card) format based on the VITA 57 standard is an alternative to supplier-specific solutions by offering standard physical and electrical interfaces to FPGAs. This allows the use of a standard mezzanine card portfolio on the market using a standardised interface method via a pre-defined connector.

VITA 57 defines the specifications of the mezzanine I/O module with connection to the FPGA or any other device with reconfigurable I/O.

FPGA design and control
Control and access to the FPGA is provided via the GX3800e’s driver which includes DMA and interrupt support, tools for downloading the compiled FPGA code, and register read and write functionality. The GX3800e’s unique architecture partitions the PCIe interface separately from the user FPGA – eliminating the need for the user to incorporate the PCIe interface as part of his or her overall FPGA design. Access to the user FPGA is via an internal address and data bus with predefined registers which are supported by the module’s software driver and an interactive UI. The result is a simplified design / integration process since both the PCIe bus interface and associated software driver are known, tested entities.
The board is supplied with the GXFPGA library, a software package that includes a virtual instrument panel, and a Windows 32/64-bit DLL driver library and documentation. The virtual panel can be used to interactively program and control the instrument from a window that displays the instrument’s current settings and status. In addition, interface files are provided to support access to programming tools and languages such as ATEasy®, LabVIEW, LabVIEW/Real-Time, C/C++, Microsoft Visual Basic®, Delphi, and Pascal.

Once the user has compiled the FPGA design, the configuration file can be loaded directly into the FPGA or via on-board flash memory.