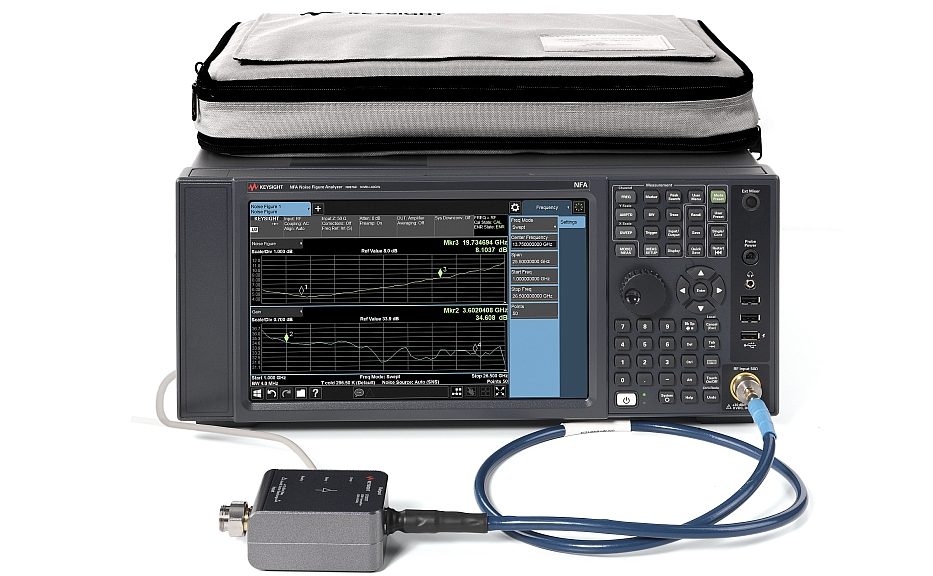 There are various ways to understand the quality of an RF receiver, such as its sensitivity or the bit error rate it achieves in decoding digital signals. But a characteristic called ‘noise figure’ can measure how much noise each part of a system creates, giving designers a consistent way to explore the trade-offs necessary (think amplifier design vs. transistor performance) to achieve the required system performance.

Noise figure is also generally a function of frequency, but independent of bandwidth. It is commonly expressed as equal to 10 log F.

Various issues affect how noise measurements are made. These include:

The noise power delivered by a linear two-port device is linearly dependent on the input noise power or temperature, as shown in Figure 1.

Figure 1: For a source impedance at absolute zero, the power output consists solely of added noise Na from the device under test (Source: Keysight)

If the slope of this line and a reference point are known, the output power that corresponds to a noiseless input power Na can be found. From Na, the noise figure or effective input noise temperature can be calculated.

One way of determining the noise slope is to apply two different amounts of input noise and measure the output power change, using a noise source. These are often built using a low-capacitance diode that generates noise when reverse biased with a constant current. Precision noise sources such as the Keysight SNS Series also have an output attenuator to provide a low standing wave ratio to minimise mismatch errors.

To make noise figure measurements, a noise source must have a calibrated output noise level, known as an excess noise ratio (ENR). Unique ENR calibration information is supplied with the noise source and, in the case of the SNS-Series, stored on EEPROM. When noise sources are used at temperatures other than 290K, measurements must be thermally compensated. The SNS Series noise sources include a temperature sensor that can be read by Keysight’s NFA analysers.

The Y-factor method involves connecting a noise source to the device under test (DUT) and then measuring the output power with the noise source on and off. The ratio of these two powers is called the Y-factor.

The accuracy of the relative level measurement is important. One of the advantages of modern noise figure analysers is that the internal power detector is very linear and can very precisely measure level changes.

The Y-factor and the ENR can be used to find the noise slope of the DUT, as shown in Figure 1. Since the calibrated ENR of the noise source represents a reference level for input noise, an equation for the DUT internal noise, Na, can be derived. From this we can then derive an expression for the total system noise factor, FSYS, which represents the noise contribution of all parts of the system.

The equation defining the Y-factor can also be elaborated to correct for the condition when the noise source cold temperature, Tc, is not at the 290K reference temperature, To.

There are limitations to this approach. The noise bandwidth of the power-measuring device must be known, perhaps requiring a network analyser. The output power must be measured on a device that measures true power, since both noise and a continuous wave (CW) signal are present. Thermal power meters measure true power very accurately but may require a lot of amplification to read a low noise level, and will also need a bandwidth-defining filter. Spectrum analysers have good sensitivity and a well-defined bandwidth but the detector may respond differently to CW signals and noise.

In this approach, the output power of the device is measured with an input termination at a temperature of approximately 290K. If the gain of the device and the noise bandwidth of the measurement system are known, the noise factor can be determined.

A noise figure analyser has a receiver with an accurate power detector and a circuit to power the noise source. It allows ENR to be entered, and can display the noise figure for the frequency to which it is tuned. It computes noise figures using the Y-factor method.