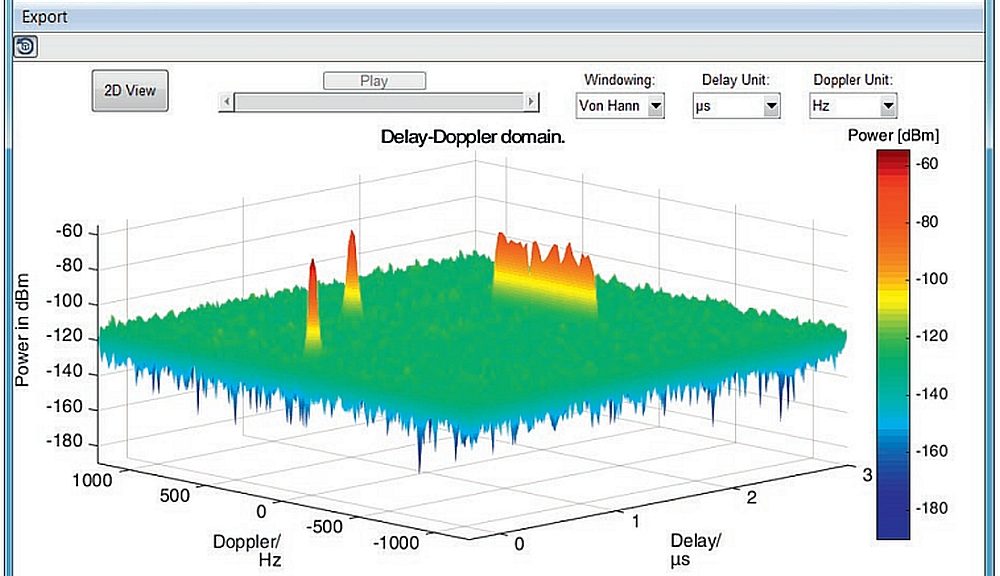 5G, the next generation of wireless communications, should be operational by 2020. But to make the planned, significant performance boost over today’s networks possible, extensive preliminary investigations are required. Finding and characterizing suitable transmission channels will play an important role.

Still, no one yet knows with certainty exactly what 5G will be and with which methods and technologies these ambitious goals will eventually be reached. However, two key features clearly stand out. First, 5G will open up entirely new frequency bands into the millimeter-wave range (i. e. above 30 GHz) for commercial wireless communications applications (Fig. 1). Second, the wanted signal bandwidth will be significantly extended. These new channels require comprehensive analysis to ensure their optimal utilization. The most important method for characterizing cellular radio channels is channel sounding.

What goes around…
… does not always come back around. At least not when it comes to broadband radio signals and when anything but a perfect transmission path lies between the transmitter and receiver. To still be able to operate high-performance wireless communications under these circumstances, you have to know the exact characteristics of the radio channel. Its characteristics are provided by a channel sounder. Channel sounding is the process of determining the impulse response of a transmission channel, especially a cellular radio channel. The concept originated from classic acoustic measuring methods for determining distances, for example determining water depth with an echo sounder [1].

The channel impulse response (CIR) provides complex, comprehensive information on the impact of the channel of interest on a radio signal, including the magnitude and phase of the signal. It is therefore ideal for characterizing the channel. Signal echoes caused by reflections, distortions due to diffraction and scattering effects, shadow effects caused by buildings and trees, and even weather-related effects such as rain and snow have a detrimental influence on the radio channel. Fig. 2 shows an example of the squared magnitude of a time-variant channel impulse response, h(t, T), known as the power delay profile (PDP). 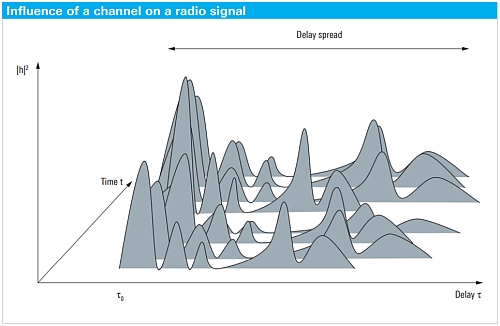 A possible multipath propagation of the radio signal can be seen on the delay axis T (Tau). The local maxima suggest strong, delayed echoes and, therefore, reflectors in the radio channel. In the example, changes of the channel impulse response over time can be seen along the time axis t. A possible cause for such a time variance is a moving receiver, or more generally, changing channel conditions.
In this example, the essential requirements for a channel sounder are already noticeable. In addition to a high sensitivity within the frequency range and bandwidths under consideration, the channel sounder must be fast enough to detect time changes in the channel. But it must also measure every single channel impulse response long enough to record the entire delay spread with the highest possible time resolution and dynamic range. Unfortunately, these are two conflicting requirements that can only be met with a compromise.

The best possible compromise depends on the scenario, i. e. stationary measurements or measurements in strong time-variant environments (such as in a fast train). Clearly, a channel sounder should provide a very high degree of quality and flexibility, and that is why the solution presented here is perfect.

The channel impulse response can now be measured by correlating directly in the time domain. To do this, special auto correlation properties of specific compressed, periodic pulse signals are utilized [1]. These sounding signals have a very simple structure. For example, simple, maximum-length pseudo random binary sequences (PRBS), known as M-sequences, are suitable for this purpose. The idea of channel sounding is very simple. A periodic M-sequence is transmitted over the radio channel to be examined. The received signal is correlated at the “end” of the channel with the known M-sequence, which provides the desired channel impulse response. Of course, sounding sequences can be optimized, e. g. with respect to their spectral purity or their crest factor. This is why – in addition to M-sequences – Frank-Zadoff-Chu sequences and FMCW signals (chirp signals) known from radar technology are also used.

Why “5G channel sounding” in the first place?
The era of digital mobile communications began with GSM, but with this new era also came the challenge for base and mobile station manufacturers to deal with time and location dependent radio channels. In particular, the solution to the problem lay in the extensive measurement of radio channels and the following derivation of channel models. The channel models served as the main basis of development for the entire wireless communications system including cellular network planning tools. The channel models have been continuously developed up to today’s fourth generation of wireless communications (LTE-A) [2].

Since the previous wireless communications generations usually operated in the same frequency bands below 3 GHz, it was relatively easy to adapt the channel models again and again. However, if networks operate in entirely new frequency ranges, such as in the millimeter-wave range, and extend the useful channel bandwidth to a multiple of the bandwidth used up to now, then the existing channel models are no longer sufficiently suitable [1]. New models, obtained only from the data of extensive channel sounding measurement campaigns, must be put in place. For this very reason, wide-ranging measurement campaigns in typical environments were launched, for example, by 3GPP at the “5G Workshop” in September 2015.

The solution
A channel sounding solution for the direct measurement of the channel impulse response consists of a high-quality, flexible transmitter for sounding sequence generation and a highly sensitive broadband receiver with very high dynamic range (Fig. 3). The R&S®SMW200A vector signal generator and the R&S®FSW signal and spectrum analyzer are two instruments found in the Rohde & Schwarz portfolio with just the right characteristics.

Fig. 3: Basic setup for the direct measurement of the channel impulse response (without cabling or antennas).

The new R&S®TS-5GCS MATLAB® based PC application software makes it easy to determine the channel impulse response. It evaluates the I/Q data provided by the R&S®FSW and calculates the channel impulse response by correlation with a calibrated original sequence. The measurement data is displayed graphically and can be exported in MATLAB® compatible format (Figs. 4 and 5). 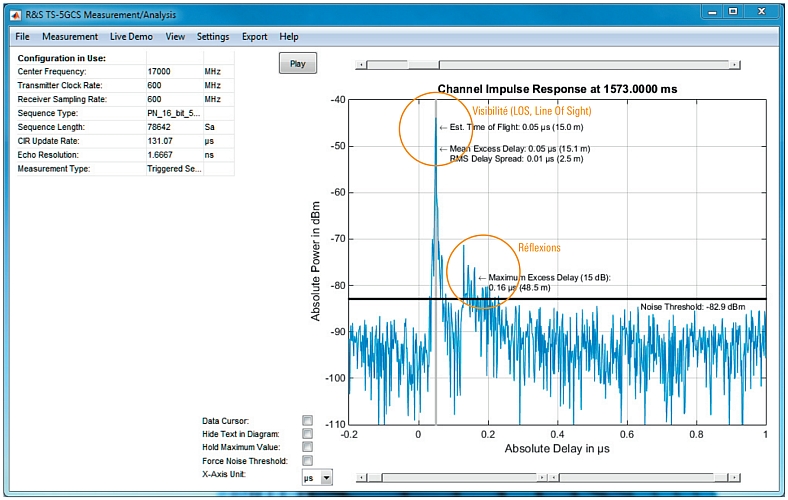 Fig. 4: Exemplary measurement of a power delay spectrum. The atrium of the Rohde & Schwarz training center in Munich served as a test site. The measurement was performed at 17 GHz using a 13 dBi horn antenna at the transmitting end (R&S®SMW200A) and an omnidirectional broadband antenna at the receiving end (R&S®FSW43) – a typical antenna choice for channel sounding measurement campaigns. The reflections from the floor and ceiling of the building stand out.

The user benefits from the superior, stable properties of the measuring instruments at frequencies into the millimeter-wave range and can concentrate on evaluating the data measured. Plus, the sounding software provides the necessary flexibility with regard to the sounding sequences. All sounding signals are delivered as R&S®SMW200A compatible waveforms. In addition, R&S®ARB Toolbox Plus allows users to adapt the sequences to their needs and generate their own sounding sequences. 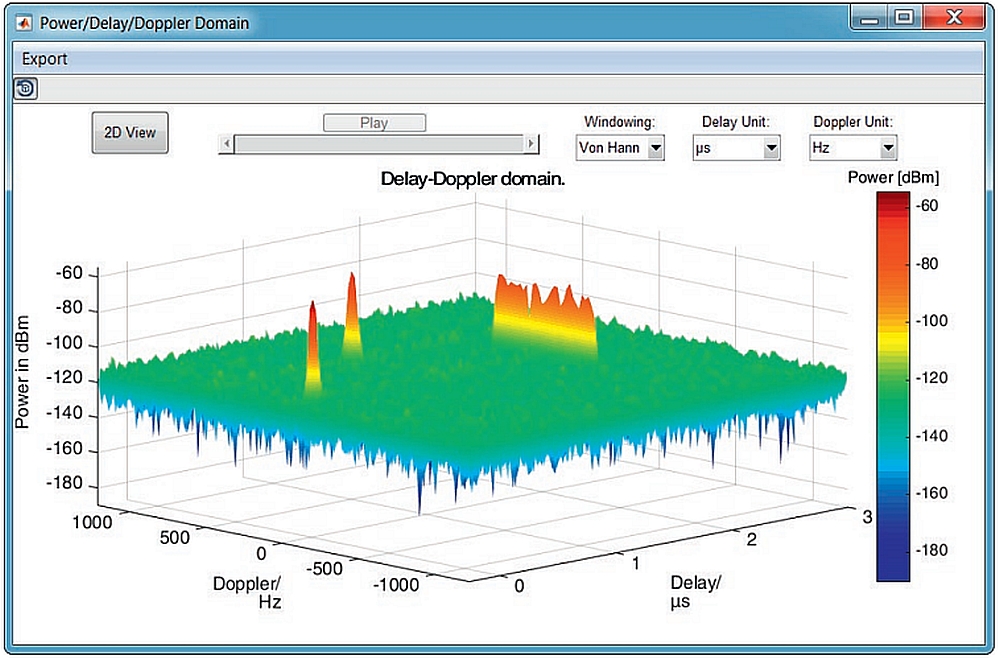 Fig. 5: A three-dimensional power delay Doppler profile. For each echo, the corresponding Doppler frequency shift is shown. The profile illustrated here was not produced by measuring a real path, but was generated with the fading simulator of the R&S®SMW200A, which can very easily demonstrate and verify the operation of the channel sounding software.

Summary
The new R&S®TS-5GCS channel sounding software together with an R&S®SMW200A vector signal generator and an R&S®FSW signal and spectrum analyzer is a compact, highly flexible, stable and reproducible solution for channel measurement in the high frequency bands of the fifth generation of wireless communications. There is a suitable instrument version available for all frequency ranges and bandwidths, along with suitable transmit and receive antennas. The sounding software delivers the desired channel impulse responses in a surprisingly convenient manner. .