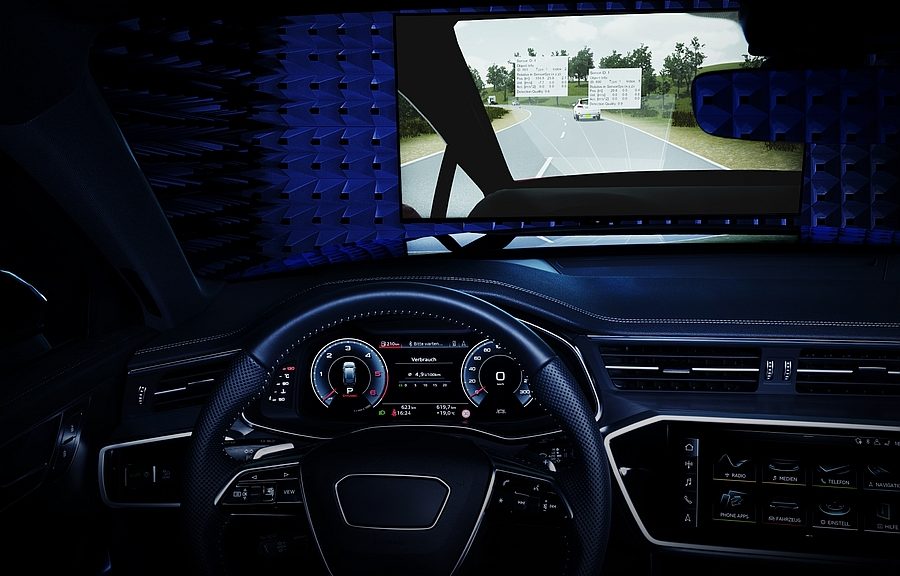 HiL testing is a technique used to accelerate the development of complex real-time embedded systems such as ADAS in situations where using a fully assembled vehicle is not possible or too costly, time-consuming or dangerous. Instead, the operation and behavior of supporting systems are electronically simulated.

The system setup consists of the Vector DYNA4 virtual test drive software, which provides the environment simulation and the user interface for scenario configuration and test execution, and the Rohde & Schwarz radar test system, which generates dynamic artificial objects for the radar sensor under test based on ASAM OSI object lists implemented in the DYNA4 environment simulation software. Vector CANoe receives the radar sensor’s bus output signals with the objects detected by the radar, and the software then analyzes and visualizes them. The detected objects are also compared with the simulated ground truth.

The Rohde & Schwarz radar test system comprises the R&S AREG800A automotive radar echo generator as the digital backend and the R&S QAT100 antenna array as the frontend. The solution opens up a completely new world of possibilities for testing radar-enabled ADAS features and ensures the safety of autonomous driving functions in HiL setups. 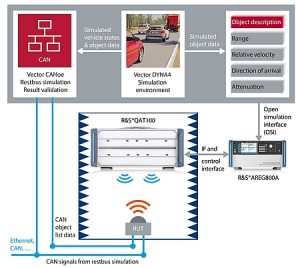 Antenna array technology allows complex artificial objects to be generated for the radar sensors at variable distances and with variable radial velocity, object size and angular direction. Antennas and test equipment do not need be moved physically. A responsive and dedicated HiL interface that conforms to the ASAM open simulation interface specification allows realistic over-the-air stimulation of radar sensors with challenging, complex and even risky driving scenarios. The radar test system is future-proof thanks to a modular and scalable concept.

In addition to offering standard radar based ADAS feature tests such as adaptive cruise control (ACC) and autonomous emergency breaking (AEB) scenarios, the system can be upgraded to cover advanced test cases.