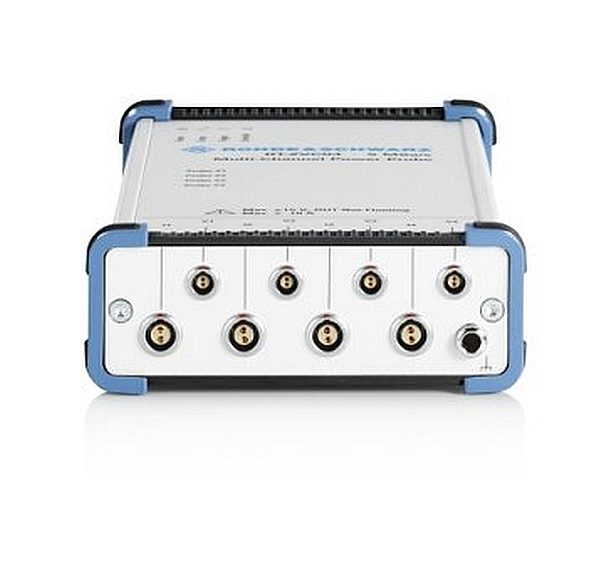 The Rohde & Schwarz RT-ZVC02/04 multichannel power probe can measure across large current and voltage ranges without having to switch ranges, making it possible to monitor the power consumption of chipsets pr radio modules. When used with an R&S RTE or R&S RTO oscilloscope, the current drain can be correlated with analog and digital control signals, enabling developers to optimize the battery life of wireless devices early in the development cycle.

The R&S RT-ZVC02/04 multichannel power probe permits simultaneous measurement of up to four currents and four voltages over a wide dynamic range. The measured values are transmitted to the R&S RTE or R&S RTO oscilloscope via the digital logic interface and then displayed synchronized with the oscilloscope’s analog channels. A trigger unit integrated into the power probe enables triggering on the R&S RT-ZVC input signals.

The probe contains an 18 bit A/D converter for each current or voltage measurement channel. This makes it possible to measure currents in the uA or nA range as well as high current peaks up to the A range within the selected current measurement range without having to switch ranges.

Thanks to the 1 MHz bandwidth and a sampling rate of 5 Msample/s, even brief current pulses can be captured so that the power consumption can be correctly determined. Three selectable internal shunts allow the user to select the optimal current range. An external shunt can be used for customer-specific current measurement ranges or when the current needs to be measured as close to the DUT as possible.

The R&S RT-ZVC probe is available in combination with an R&S CMW communication tester and R&S CMWrun software for battery life testing. This setup makes it possible to correlate wireless protocols with the application software running on IoT devices so that a single power probe can be used for oscilloscope measurements during the development of embedded systems and later for analysis and optimization of the system power consumption when developing IoT system applications.

The R&S RT-ZVC multichannel power probe will be available as an accessory for the R&S RTE and R&S RTO oscilloscopes starting in June 2017.