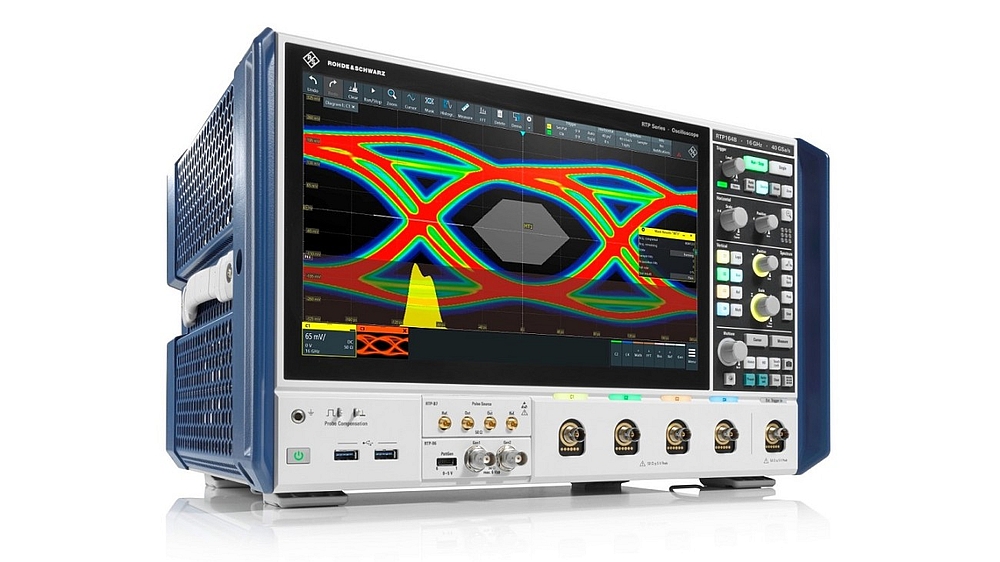 The new R&S RTP models feature a larger and brighter 13.3-inch (920 × 1080 pixel) full HD touchscreen. The front panel has also been completely redesigned. The 16:9 aspect ratio display ensures that waveforms can be viewed while parameters can be quickly changed and modified.

Rohde & Schwarz considers the R&S RTP to be the most compact and lightest high-performance oscilloscope in its class.
It has a footprint of 441 mm (W) × 316 mm (D) and a weight of 18 kg.

“When we decided to update the R&S RTP, it was paramount for our R&D engineers to improve its overall ergonomics so that test engineers could focus on the design problems at hand and not on using the test equipment,” said Andreas Werner, Vice President Oscilloscopes at Rohde & Schwarz.

The R&S RTP family of high-end oscilloscopes consists of various models with 2 or 4 analog inputs offering a bandwidth of 4 GHz to 16 GHz and a sampling rate of up to 20 GS/s per channel (40 GS/s on two channels). The bandwidth of all models can be upgraded to 16 GHz.

The hardware implemented 16 Gbps clock data recovery (HW-CDR) that enables real-time eye diagrams for long-term monitoring of high-speed serial interfaces, is a highlight of the R&S RTP. The new R&S RTP-K136 and K137 options support data eye analysis of sequential bits in an acquired data stream with maximum data rates of 8 Gbps and 16 Gbps. The timing for the bit slicing is based on the continuously running HW-CDR. According to Rohde & Schwarz, this has significant advantages relative to traditional post-processing with a software-based CDR. Users can combine this function with the real-time deembedding and real-time differential math functions of the R&S RTP to complete debugging or searches for signal faults in a fraction of the time.

While supporting a wide range of applications, Rohde & Schwarz offers the new R&S RTP-K39 user defined math option. It allows test engineers to call a Python script for complex calculations and display the results as a math signal on the oscilloscope.