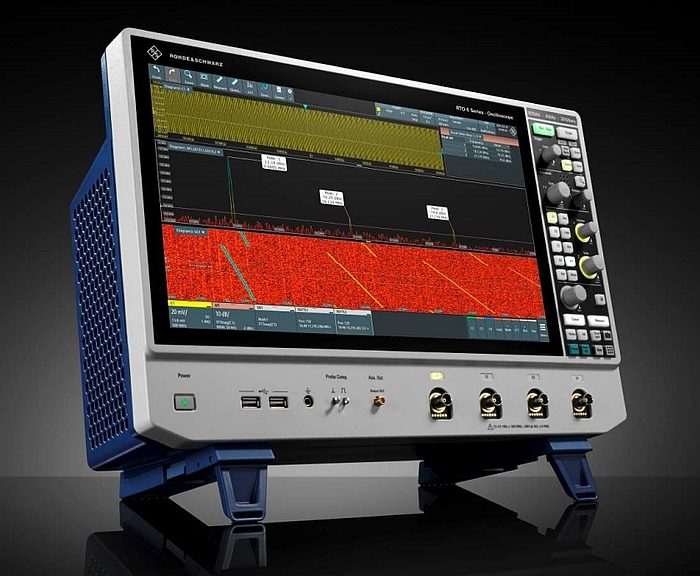 The R&S RTO6 oscilloscopes have a new design and, above all, a completely redesigned touchscreen user interface designed to make the operation of these instruments even easier and more fluid. They are equipped with a large Full HD touch screen: 15.6 inches compared with 12.1 inches for the RTO2000. Their HMI can be customized in order to access more quickly to the functions commonly used by the user. In particular, signals can be arranged by simple drag-and-drop operations in different parts of the screen using R&S SmartGrid technology. All oscilloscope applications can be accessed at the touch of a button from the app cockpit window.

The R&S RTO6 series consists of six digital oscilloscope models with bandwidths of 600 MHz, 1 GHz, 2 GHz, 3 GHz, 4 GHz and 6 GHz. Equipped with four analog inputs, they digitize signals up to a rate of 10 GS/s per channel, rising to 20 GS/s on two channels for the 4 and 6 GHz bandwidth models. Thanks to the standard integration of a thermostatically controlled crystal oscillator (OCXO), these oscilloscopes have a time base accuracy of 10 ppb. They are equipped as standard with a 200 Mpts acquisition memory, which can be optionally extended to 2 Gpts per channel.

The signals are digitized with 8-bit resolution A/D converters, but thanks to its low-noise input architecture combined with appropriate digital processing technology, Rohde&Schwarz claims that the effective bit count is up to 9.4. This high resolution, combined with a 65 dBc spurious-free dynamic range (SFDR), promotes the integrity of acquired signals. The HD mode by means of digital filtering improves the vertical resolution of the oscilloscopes up to 16 bits. This 16-bit digitized filtered signal can also be evaluated by Rohde & Schwarz’s patented digital triggering system. This enables the R&S RTO6 to increase its triggering sensitivity and to isolate even the smallest signal details. In HD mode, these oscilloscopes have a noise floor of 10µVrms (at 50 Ohms, 1mV/div, 10 MHz).

These oscilloscopes, which have a refresh rate of one million waveforms per second, thanks to an architecture using a dedicated ASIC, offer a wide range of analysis functions. They offer the possibility to analyze signals in the time and frequency domain by FFT processing, as well as to perform protocol and logic signal analysis.

The mask tests, which can be configured via touchscreen controls, identify signal anomalies within defined tolerance limits.

The R&S RTO6 series oscilloscopes feature more than 90 measurement functions, classified into amplitude and time, jitter, eye diagram, histogram and spectral measurements. In addition, numerous application-specific software options for complex measurements are available. Users can easily activate these as their testing needs change by entering a key code, even after the instrument is purchased. These options include serial protocol triggering and decoding, automated compliance testing of high-speed digital interfaces, specific options for jitter and power analysis, as well as spectral analysis, time-domain transmission and reflection measurements (TDR/TDT), and signal processing.

Time-domain transmission and reflection measurements (TDR/TDT) can be performed with an optional two-channel 100 MHz signal generator integrated on the front panel of the oscilloscope, which can also complement its 4 analog channels with 16 digital inputs available on the rear panel.