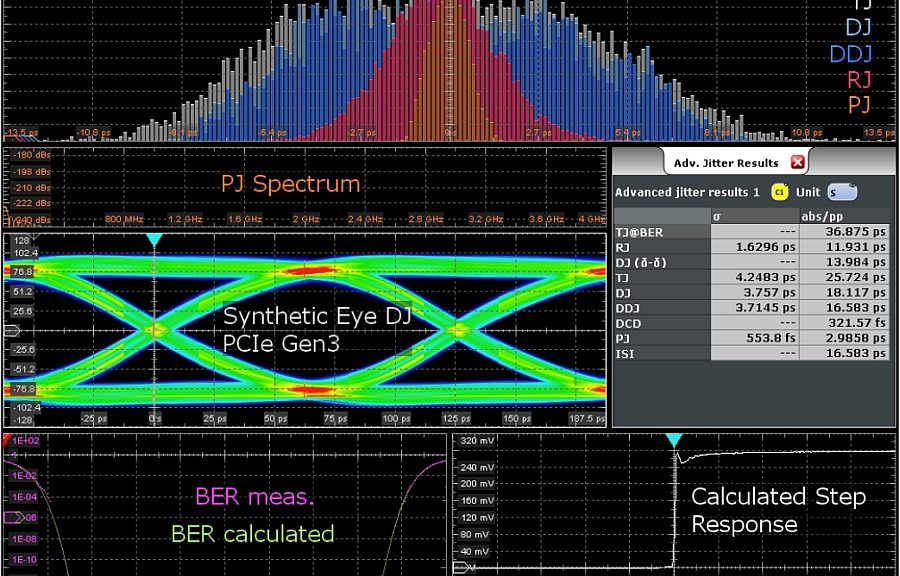 With increasing data transmission speeds and decreasing signal amplitudes, jitter, when transmitting signals via digital interfaces, takes up a significant part of the signal interval and becomes a source of potential failures. It is therefore necessary to have tools that can accurately characterize the jitter of a signal and to know the different elements that make it up.

According to Rohde & Schwarz, the new R&S RTO-/ RTP-K133 option makes it possible to perform advanced jitter analysis by implementing an analytical approach that separates its individual components: random jitter as well as its deterministic components (especially data dependent jitter and periodic jitter). This approach is based on a parametric signal model that characterizes the complete behaviour of the transmission link under test.

One of the main advantages of the method developed by Rohde & Schwarz is that it exploits a jitter model that includes all the characteristics of the waveform of the signal under test, in contrast to traditional methods that reduce the data to a set of time-interval error measurements. This method therefore delivers consistent measurements, even for relatively short signal sequences, as well as information that was not previously available, such as step response, or the ability to distinguish between vertical and horizontal periodic jitter. Detailed jitter information is presented in different forms: synthetic eye diagrams, histograms of each of the jitter components, spectral and peak views of periodic jitter, and a bathtub curve for estimating the Bit Error Rate.

The R&S RTx-K133 option is available for oscilloscopes of the R&S RTO and R&S RTP series.