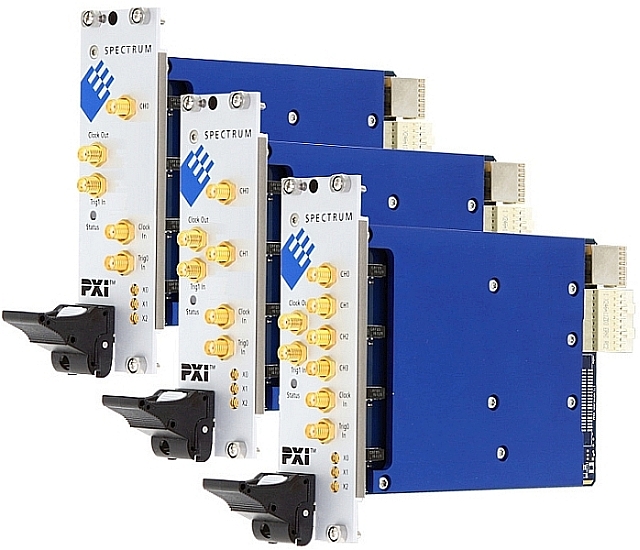 Each channel is equipped with its own analog-to-digital converter (ADC), with real-time signal sampling at rates from 1.25 GS/s to 5 GS/s, and scope-like signal conditioning circuitry that allows programming of parameters such as input gain, signal offset and coupling.

The digitizers also offer bandwidth up to 1.5 GHz making them ideal for automated testing applications where wideband electronic signals from DC to the GHz range need to be acquired and analyzed.

The flexible front-end circuitry of the M4x.22xx series digitizers is complemented by a trigger system, on-board acquisition memory of 4 GSamples and a host of data acquisition and readout modes.

For example, the trigger source can be any of the digitizers input channels, either of the two external trigger inputs, any of the eight PXI trigger lines or the PXI star trigger. Trigger modes include positive or negative edge, both edges (window) and software. In addition, logic triggering can be implemented based on the state of the channel and the external trigger inputs.

Acquisition and readout modes include single-shot capture (for transient recording), FIFO (for streaming data directly over the bus), segmented memory (Multiple Recording), gated acquisition (Gated Sampling) or the combination of segmented acquisition of fast signals in parallel with slow continuous data recording (ABA mode). Trigger events can also be time stamped so that you know when they occurred.

All the M4x.22xx series digitizers are packaged in a dual width 3U module, which incorporates a four lane PCI-Express Generation 2 interface. The high-performance interface allows data transfer speeds in excess of 1.7 GB/s.

For waveform display and analysis, acquired data can be transferred to an embedded or external processor. In addition, data can be shared with other modules like arbitrary waveform generators (AWGs) to create sophisticated capture-replay or stimulus-response, testing scenarios.

On-board calibration is standard and a clocking system drives the 8-bit ADCs on each channel synchronously so that timing measurements are precise and inter-channel phase errors are minimized. Dynamic parameters provide effective bit measurement (ENOB) of 7.5 bits, signal-to-noise ratio (SNR) up to 46.9 dB and spurious free dynamic range (SFDR) of over 62 dB.

The modules also incorporate the latest in FPGA-based firmware so that acquired data can be processed on-board prior to being transferred over the bus. Block averaging and block statistics packages are available for high trigger rate applications that require hardware based processing functions. Block averaging can be used to reduce signal noise and improve measurement resolution, while block statistics perform a peak detection process that yields a waveform’s maximum, minimum and average values.
Ideal for automated test

To allow integration into any test system, the units are shipped with a host of software tools so users can create their own control programs with almost any popular programming language. This includes C++, Visual Basic, VB.NET, C#, J#, Delphi, Java and Python code. Third party software support is also provided for LabVIEW, LabWindows and MATLAB.

For users not wanting to write software, Spectrum also offers its powerful SBench6 Pro software. SBench6 lets you control all of the digitizer’s operating modes and hardware settings from one simple, easy-to-use, graphical user interface. The software has a host of built-in features for waveform display, data analysis (such as FFT, parameters and mathematics) and documentation. Waveforms can also be stored and exported to other devices and software programs using the most popular formats such as ASCII, binary and Wave.

All units include a base version of Spectrum’s SBench 6 software, support drivers for most popular programming languages and a two year manufacturer’s warranty.