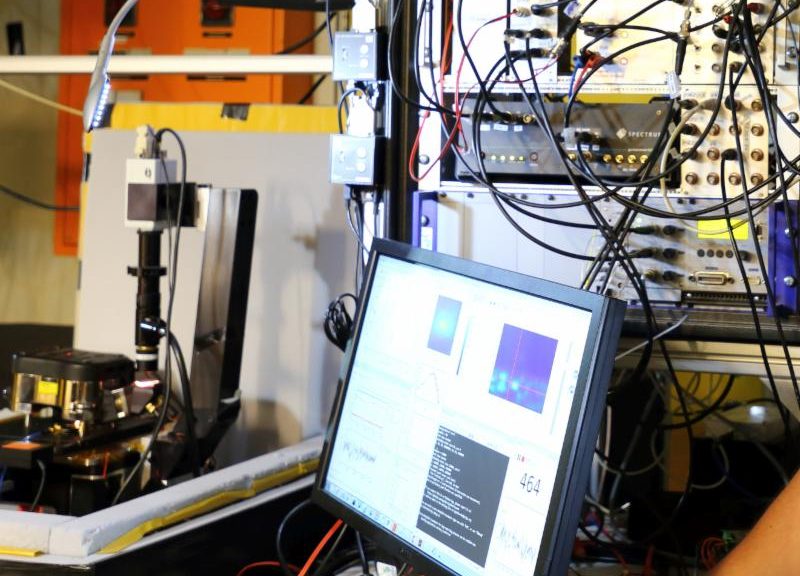 The Stuttgart University has chosen a Spectrum Arbitrary Waveform Generator for their experiments in which single atoms in a diamond are replaced by nitrogen atoms. This method is a base for applications like a magnetic field detector at the atomic level or a qubit in a quantum computer.

The University of Stuttgart’s Physics Department is researching in the field of single, solid-state defects with a particular focus on Nitrogen-Vacancy (NV) centers in diamond, which are formed by removing a carbon atom and replacing it with a nitrogen atom to form a NV pair.

The NV defect centers can be used as an atom-sized magnetic field sensor – effectively a nano-scale Nuclear Magnetic Resonance (NMR) device as it can detect the interaction of the NV’s spin with tiny local magnetic fields detecting both strength and frequency.  For example, measuring the magnetic field strength of the tiny read/write heads on hard disk drives so that they can be characterized.  The nano-scale NMR function could also be used for structural analysis of a single protein or thin films as only a few spins are needed to measure these small samples unlike a normal size NMR.

NVs can also be used as a qubit for processing functions in quantum computing by using two spin states and superpositions between them.  This is of particular interest as they have stable spin states at room temperature unlike similar options that require ultra-low temperatures and pressures.
Several NVs are created typically 5 nm within the diamond at a depth that depends on the energy used to implant the nitrogen atom into the diamond lattice.  The aim is to be able to implant them one at a time to create arrays for quantum computing.

The NV center is manipulated with sequences of optical excitation pulses as well as microwave and radio frequency pulses. This requires extremely precise sequences of very short pulses to be created.  One of Spectrum’s latest generation Arbitrary Waveform Generators (AWG) was selected to provide the input for this as Spectrum was able to deliver an AWG with the required ten output channels (four analog and 6 digital channels).  Spectrum’s modular design philosophy enabled the company to add six additional digital marker channels to the standard four analog channels by the addition of an internal daughterboard to provide the extra connections.  The AWG model used is a DN2.663-04 generatorNETBOX, which is a stand-alone unit that connects through Ethernet to a controlling PC.

The AWG controls the LASER, the microwave signal using IQ modulation, generation of radio frequency pulses and triggering data acquisition devices to determine the spin state.  “Effectively it runs the whole experiment thanks to its large number of output channels,” explained Thomas Oeckinghaus, the experimental physicist who is doing his PhD on this research.  “The key factor in selecting the Spectrum AWG was its speed as our experiments require very short pulses down to between 10 to 20 nanoseconds.  At 1.25 GSamples/s, it can control these with a very high time resolution of 800 picoseconds.”

Using a new piece of equipment, especially one that provides a high level of flexibility, can always be challenging but he found that the documentation was very good which made setup straightforward.  Only one problem was encountered and Spectrum provided a new driver with a fix the next day.  “Post sales support can often be ignored in the checklist when selecting a new piece of equipment,” he concluded.  “I was really impressed to have a fix the next day.  That gives me confidence that if I ever have a problem, Spectrum will quickly sort it.”

Each channel of Spectrum’s AWG has a 16-bit digital-to-analog converter (DAC) that can generate wave shapes with frequency content from DC to 400 MHz to emulate real world signals.  To allow the generation of long and complex waveforms, the AWG has a number of operating modes such as Single-Shot, Loop, FIFO, Gating and Sequence Replay.  The AWG can even output signals while new waveform data is being sent to the on-board memory.