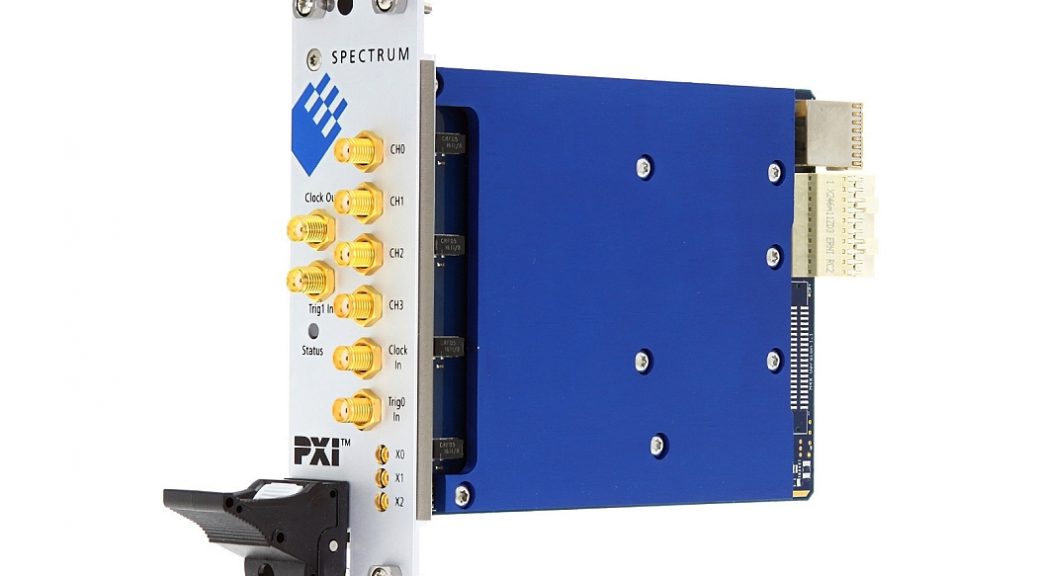 Spectrum’s M4x series of PXIe Arbitrary Waveform Generators (AWGs), based on the modular PXIe instrumentation standard, includes five new modules that provide one, two or four channels. Each channel is equipped with the latest 16 bit digital-to-analog converter (DAC) technology and the various models have maximum clocking rates of 625 MS/s or 1.25 GS/s for generating wave shapes with frequency content from DC to 400 MHz.

The dual width 3U AWGs feature a PXIe x4 Gen 2 interface that allows waveform data to be transferred to the module’s 4 GB of on-board memory, at speeds up to 1.4 GB/s. PXIe compliant, the modules can be used in any PXIe or PXI hybrid chassis. Support is also provided for chassis distribution features such as the PXIe/PXI reference clock, star-trigger and trigger bus.

To allow the generation of long and complex waveforms, the AWGs include a number of operating modes such as Single-Shot, Loop, FIFO, Gating and Sequence Replay. In FIFO mode, the instruments can stream data continuously from PC memory to the AWG memory over the PXIe interface. The AWGs can even output signals while new waveform data is being sent to the on-board memory.

For further versatility, each channel of the AWG is clocked using a phase locked loop (PLL) control system that can be generated internally or from an external clock or reference. Three front-panel, multipurpose I/O connectors allow access to synchronous marker outputs, asynchronous digital I/O lines, the trigger output, the run and arm status and the PLL reference clock.

The AWGs are designed to output signals that emulate those found in the real world, delivering programmable output levels from ±200 mV to ±4 V (±5 V for 625 MS/s models) into high-impedance and ±100 mV up to ±2 V (±2.5 V for 625 MS/s models) for 50 Ω termination. Using 16 bit digital to analog conversion, the AWGs also allow fine signal details to be generated. They deliver dynamic performance with signal-to-noise (SNR) up to 72 dB, spurious free dynamic range (SFDR) up to 98 dB and noise spectral density (NSD) at -150 dBm/Hz.

To allow easy integration into any test system, the units are shipped with a host of software tools so users can create their own control programs with almost any popular programming language. This includes C++, Visual Basic, VB.NET, C#, VisualJ#, Delphi, Java and Python code. Third party software support is also provided for LabVIEW, LabWindows and MATLAB for users not wanting to write software.

Spectrum also offers its SBench6-Pro software that lets users control all of the AWG’s operating modes and hardware settings from a simple, easy-to-use, graphical user interface. The software has a host of built-in features for waveform creation, data analysis and documentation. These include the EasyGenerator function for producing standard wave shapes such as sine, rectangular, triangle, saw-tooth, SINC and DC. Waveforms can also be created from equations, imported from other devices (such as digitizers and oscilloscopes) or other software programs. SBench6 allows data import and export in the most popular formats such as ASCII, binary and WAV.

The M4x series products include a base version of Spectrum’s SBench 6 software, support drivers for most popular programming languages and a two-year manufacturer’s warranty.