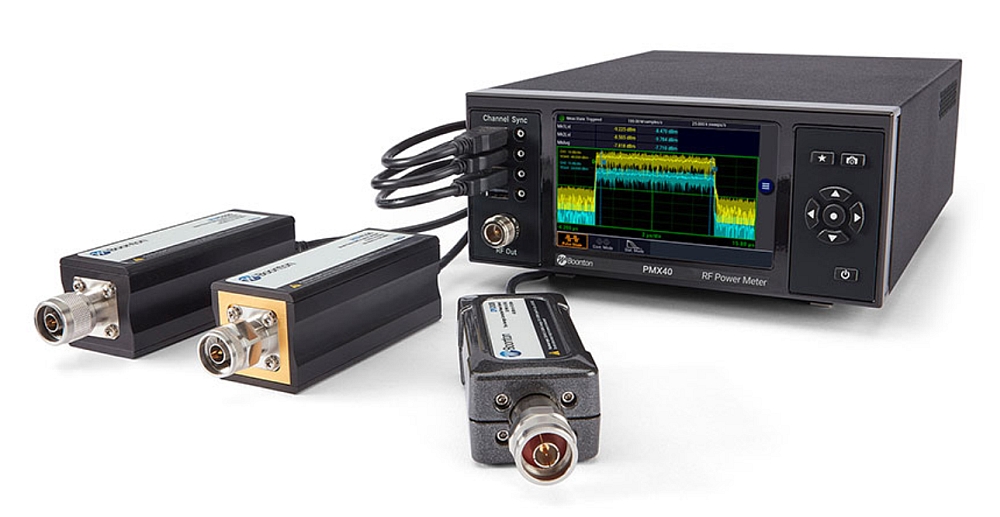 The RF power sensors are connected to the front or rear panel of the power meter via its standard USB interfaces. They can be used independently or to perform synchronized measurements on multiple channels of continuous wave (CW), modulated and pulsed signals. The PMX40 has 4 USB ports on the front panel.

The instrument’s multi-touch screen allows access and configuration of up to four sensors as well as measurement and analysis tools. It allows the display and analysis of peak and average RF power values in the time domain and the generation of statistics.

The PMX40 power meter has a variety of trigger modes and communication interfaces suitable for various test applications. A test source on the front panel provides quick verification of the operation of the RF power probes.

This new power meter accepts Boonton’s existing USB sensors that cover frequency ranges from 4 kHz to 40 GHz. All the manufacturer’s USB sensors can be used without any specific adapter or cable. They can also be used independently by connecting them to a PC.

Their control is done via the downloadable software Boonton Power Analyzer or Boonton Power View, or directly via APIs. Power Analyzer allows the control, configuration and analysis of measurements. It integrates USB drivers, a remote control API, a firmware update and a simulation mode that allows previewing functionality when a sensor is not hardware available. Power Viewer provides a user interface to perform average power measurements in seconds. The power meter can also be remotely controlled via a LAN connection.

The PMX40 power meter uses the USB format RF power sensor families of Boonton’s RTP and CPS series. The sensors of the RTP series incorporate Boonton’s real-time power processing technology, which, according to their manufacturer, virtually eliminates the measurement gaps experienced by other power sensors. In terms of RF performance, the RTP5000 series real-time peak power measurement sensors have 3 ns rise times and 195 MHz video bandwidth. The RTP4000 series sensors measure real time average power in real time. They have a dynamic range of 80 dB (-60 dBm to +20 dBm) and cover frequency ranges from 4 kHz to 6 GHz and 10 MHz to 6 GHz.