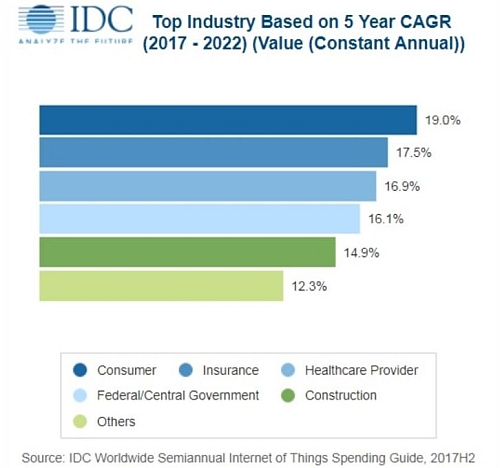 # IoT market according to GSMA

According to a GSMA study, the professional association of mobile network operators, the global Internet of Things (IoT) market will reach $1100 billion excluding hardware (devices, modules and chips) by 2025. The total number of IoT connections (cellular and non-cellular) worldwide will reach 25.2 billion in 2025, up from 6.3 billion in 2016.

Although IoT connectivity revenue is expected to increase over the forecast period, it will only represent 5% of IoT revenue by 2025. The platforms, applications and services segment will continue to gain ground, capturing 68% of the IoT market by 2025. This segment includes various IoT-related activities: platforms, application services, cloud services, data analysis and security.

IoT-based services activities such as system integration, managed services and consulting will represent 27% of the market in 2025. It should be recalled that this study does not take into account revenues related to IoT equipment (devices, modules and semiconductors).

# IoT technologies market according to IDC

The need for contextual data generation to improve the customer experience and offer new services or uses, such as predictive maintenance or the establishment of customized insurance contracts.

IDC estimates that annual growth in spending on the Internet of Things (IoT) will be 13.6% between 2017 and 2022. At that time, the market will be worth 1200 billion dollars.


According to IDC forecasts, the consumer sector will drive growth in IoT spending with a global annual growth rate of 19%, closely followed by the insurance and health care sectors.

On the business side, vehicle-to-vehicle (V2V) and vehicle-to-infrastructure (V2I) solutions are expected to record the fastest growth in spending (29%) until 2022, followed by traffic management and connected vehicle safety solutions.