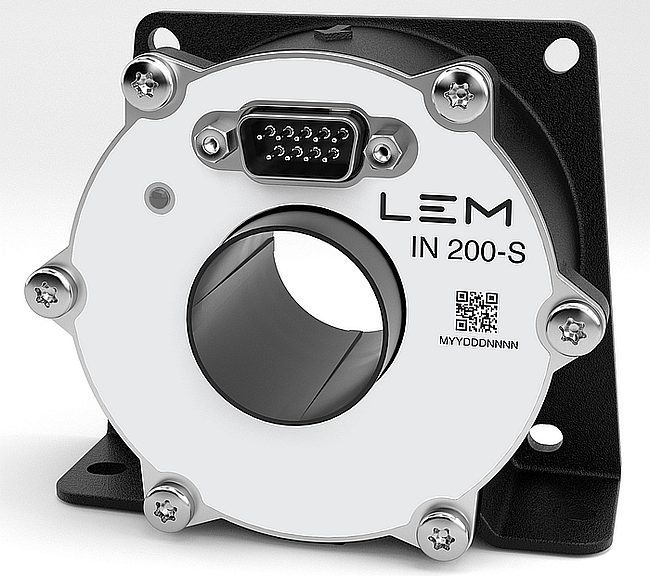 The IN 200 adds to Lem’s IN family of high-precision transducers, which now covers a current range from 100 A to 2000 A. The transducer is available in three versions for measuring nominal currents up to 100 A, 200 A and 400 A.

The IN 200 has a linearity of 0.6 ppm typical and 10 ppm maximum that can exceed 0.5 ppm according to tests performed by its designer. Its offset is between -5 ppm and 5 ppm. It can thus reach a measurement accuracy of 0.0012 %.

The IN 200 sensor uses digital technology rather than the traditional analog solutions used to cancel out noise and other effects of the various fluxgate coils. Lem says the technology it has developed significantly reduces the amount of analog circuitry in the sensor by digitally integrating the signal transformation process. The sensor also features second-order harmonic detection and temperature compensation capabilities for the fluxgate excitation voltage.

Offering galvanic separation between the primary and secondary circuits, the IN 200 also features significant noise reduction (50 ppm peak-peak) and immunity to external fields. Its digital technology provides immunity to the effects of temperature and interference. Its metal housing (previous models had a plastic housing) improves EMC immunity and reduces temperature drift through better heat dissipation.

The sensor operates over a temperature range of -40°C to +85°C and has a bandwidth from continuous to 1.1 MHz (at -3 dB). It has a 28 mm diameter opening for the passage of cables and busbars.

An LED indicator confirms normal operation of the sensor, which also provides a signal indicating the status of the transducer.