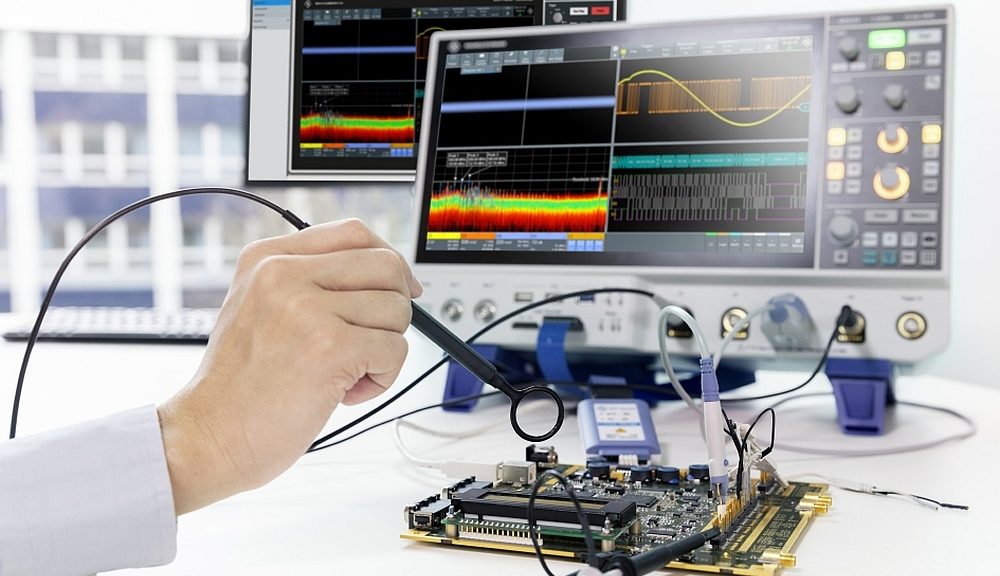 The R&S MXO 4 family is available in several variants with bandwidths of 200 MHz, 350 MHz, 500 MHz and 1 GHz. One model achieves a bandwidth of 1.5 GHz when two of the four channels are used. The bandwidth is scalable after the purchase of the oscilloscope.

Signals are digitized at a maximum rate of 2.5 GS/s on each channel and up to 5 GS/s if only two of the four inputs are used.

These oscilloscopes are equipped as standard with an acquisition memory of 400 Mpts on each of the four channels. This allows them to capture longer signals and retain the nominal bandwidth information for shorter time base settings.

Thanks to their Asic with 200 Gbps processing capability, these scopes have a real-time refresh rate of up to 4.5 million acquisitions per second. This, according to Rohde & Schwarz, is a market record and offers the opportunity to visualize more details on signals and infrequent events than with any other oscilloscope.

# 12 to 18 bit resolution
Each of the 4 inputs is equipped with a 12-bit analog/digital converter. This allows a resolution 16 times higher than that of traditional 8-bit oscilloscopes. This resolution is obtained regardless of the sampling rate, without any compromise. An HD mode allows, with certain restrictions in terms of bandwidth, to obtain a resolution of 16 bits.

# Noise and offset
The R&S MXO 4 series also features low noise (120 µV full screen @ 1mV/div) and an offset range of up to +/- 5V with a scaling of 500uV/div. This offers the possibility to visualize DC signals without the need of specific probes which are often expensive.

# Digital trigger
According to Rohde & Schwarz, the R&S MXO 4 series oscilloscopes are also distinguished by their digital trigger, “which was previously only available on more powerful and more expensive oscilloscopes”. The standard feature is a trigger sensitivity of 1/10,000 division. This makes it possible to isolate small signal anomalies.

# Spectral analysis
The time domain measurement capabilities of the R&S MXO 4 series oscilloscopes are complemented by spectral analysis capabilities. These oscilloscopes, which are capable of performing 45,000 FFTs (Fast Fourier Transforms) per second, have no complaints about their performance in terms of spectral analysis with their SFDR of 68 dBc, dynamic range of 92 dB, noise density of -160 dBm (1 Hz), second-order harmonic distortion of -56 dBc and third-order harmonic distortion of -46 dBc.

# Optional features
The R&S MXO 4 series oscilloscopes can be optionally equipped with an arbitrary two-channel 100 MHz generator and/or 16 digital inputs that transform them into a MSO (Mixed Signal Oscilloscope). The two signal generation channels are mounted on the instrument as standard, so they can be activated by a software key after purchase. The two connectors for the acquisition of 8 digital signals each are also available as standard on the instrument. To use them and thus transform the oscilloscope into an MSO with 16 logic inputs, all you need are the appropriate probes. These are identical to those already used in other Rohde & Schwarz oscilloscope models.

Protocol decoding and triggering options for a variety of industry-standard buses used in the automotive and aerospace sectors are also available, as well as an option to operate with a memory depth of 800 Mpt on two channels.