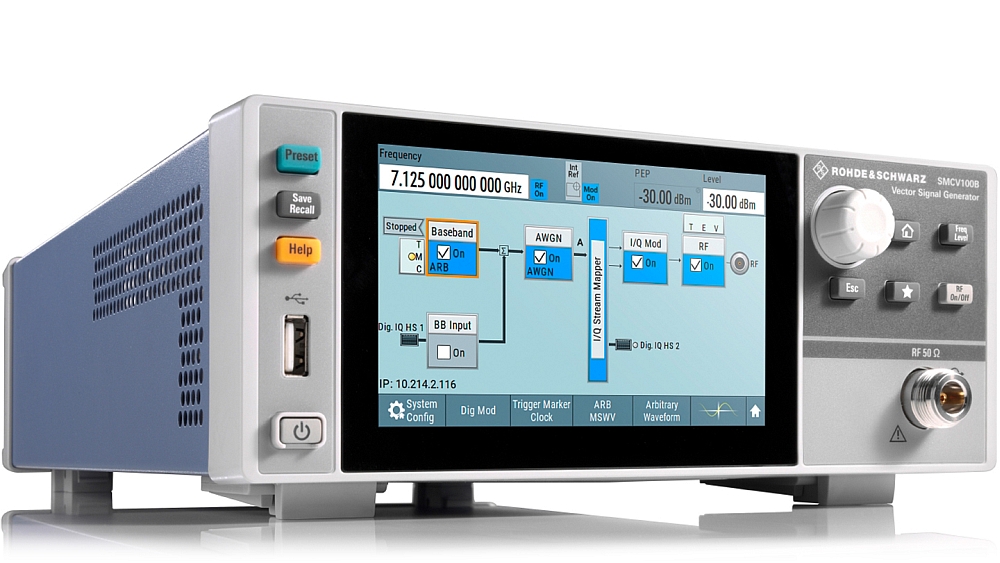 The R&S SMCV100B Vector Signal Generator delivers RF signals over a frequency range from 4 kHz to 3 GHz which can be extended by activating the appropriate options to 6 GHz or 7.125 GHz. It thus covers the FR1 frequency band for 5G NR mobile communication technologies.

In combination with the R&S WinIQSIM2 simulation software, it supports more than 30 standards for cellular and wireless communication, geolocation or broadcasting: IoT, Wi-Fi (802.11xx), etc. It also includes an arbitrary waveform generator to provide user-defined signals.

For Go/NoGo testing, the generator can produce GPS, GLONASS, Galileo and BeiDou signals from a single navigation satellite. Predefined and time-limited I/Q sequences can be generated for functional tests with fixed satellite positions.

The R&S SMCV100B uses a concept of RF signal generation with direct digital upconversion up to 2.5 GHz. This allows I/Q modulation and RF signal generation in the digital domain, virtually eliminating, according to Rohde & Schwarz, the I/Q unbalance errors and local oscillator leakage commonly observed with conventional analog I/Q modulators. Above 2.5 GHz, the generator uses an analog mixer.

Some specifications of the instrument can be added at a later date of purchase via software options that can be activated by users via key codes according to their needs. These options include extending the maximum base frequency from 3 GHz to 6 GHz or 7.125 GHz, expanding the basic RF modulation band from 60 MHz to 120, 160, and 240 MHz, increasing the RF output power to 23 dBm, and streaming waveforms with an RF bandwidth of up to 60 MHz (75 Msymbol/s). The memory depth of the arbitrary generator can also be extended from 64 MS to 1 GS.