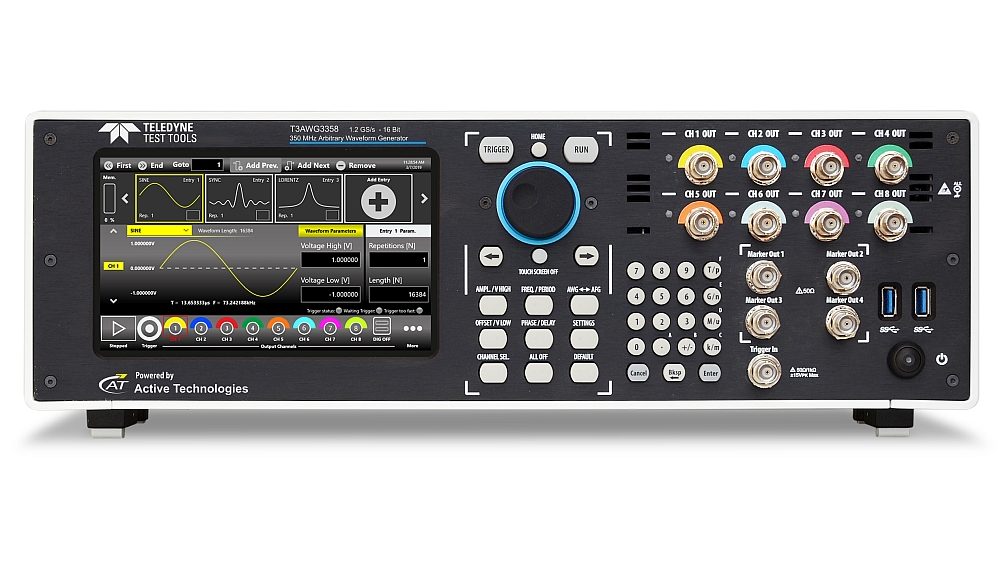 These instruments can be used as arbitrary function generators, digital pattern generators or AWGs. Depending on the model, they cover a bandwidth of 250 MHz and 350 MHz.

The Teledyne Test Tools series of arbitrary signal generators (AWG) have a vertical voltage resolution of 16 bits, an output voltage range of up to ±24 V and a waveform memory of up to 1 GS/channel as an option (128Mpts/channel as standard).

“These arbitrary 4 and 8-channel high-definition generators offer the unique ability to combine high-resolution signal generation with an output voltage range of 12 VDC (output 50Ω to input 50Ω) which is further enhanced by the ability to offset ±6 V,” says Roberto Petrillo, General Manager of Teledyne Test Tools.

In addition, when generating waveforms from a 50Ω output to a high impedance input, the voltage output range extends to ±24 V. This feature is particularly suitable for generating gate control MOSFET pulses for automotive test and power semiconductor applications.

These arbitrary signal generators offer three operating modes. They can operate as arbitrary function generators based on a variety of waveform options and modulation capabilities. In AWG mode, they deliver complex arbitrary waveforms with the ability to sequence analog/digital patterns. In Digital Pattern Generator (DPG) mode, they offer the ability to create arbitrary differential or asymmetric digital patterns on up to eight parallel bits. The 16 (4-channel models) or 32 (8-channel models) digital outputs of the instruments can be combined and synchronized with their analog output signals.

# The 4 models of arbitrary waveform generators with 4 and 8 channels: