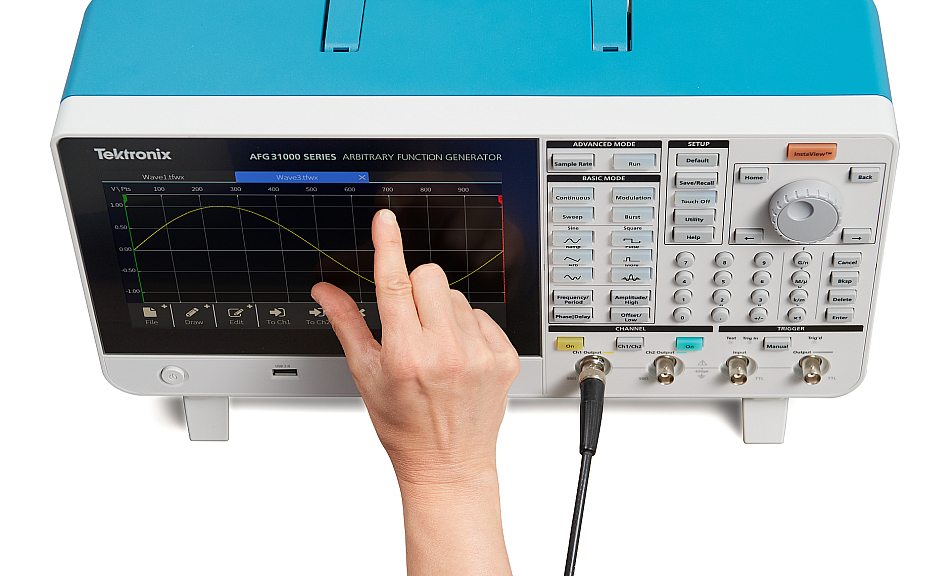 The AFG31000 Series arbitrary function generators feature a 9-inch capacitive touch screen, the largest on the market for this class of instruments, according to Tektronix. This obviously makes it possible to improve the visibility of the parameters associated with the signals from the screen through a simplified menu tree. The device is controlled like a smartphone or other tablet by pinching and sliding your finger to select, browse, locate and change its settings.

Traditional generators have an output impedance of 50 Ω, which does not correspond to that of most equipment under test (DUT). This results in an inconsistency between the waveform defined on the arbitrary function generator and the signal on the device under test. The new patented InstaView function integrated into the AFG31000 series generator, according to Tektronix, solves this problem by monitoring and displaying the waveform on the DUT without the need for additional cables or instruments. The waveform displayed on the screen reacts instantly to changes in frequency, amplitude, shape, and DUT impedance.

In addition to the traditional operating modes with arbitrary function generators, the AFG31000 series offers an Advanced or Waveform Sequencer mode. In this mode, the instrument’s waveform memory of up to 128 Mpts can be segmented into up to 256 inputs. The user can also drag and drop long waveforms or multiple waveforms into the sequencer and define their output mode. In traditional mode, users can change the frequency without worrying about the length of the waveform or the sampling frequency. The output amplitude range is between 1 mVP-P and 10 VP-P for loads of 50 Ω

The new ArbBuilder tool allows to create and edit arbitrary waveforms directly on the instrument without using a PC and transfer them later. Signals captured by an oscilloscope can be saved as files in.csv format and ArbBuilder allows them to be loaded directly into AFG31000.

According to John Moore, Technical Director at TZ Medical, the new sequencing and ArbBuilder features are “advanced features that could cut my typical configuration and test cycle in half ».

The arbitrary function generators of the AFG31000 series, available now, cover a bandwidth of 25, 50 or 100 MHz depending on the model. They are available from €1,960.