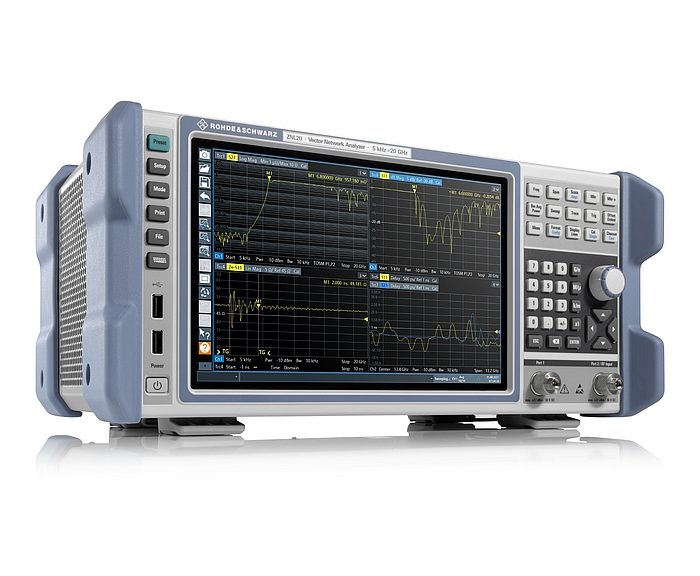 The economy VNAs now have the frequency range necessary to investigate even third harmonics for 5 GHz and 6 GHz band technologies, such as wireless LAN or mobile radio. The latest firmware release also includes a brand-new option that provides lower frequency R&S ZNL models with an internal CW signal generator.

Together with the time-domain and distance-to-fault analysis options available in the lower frequency models, the four microwave models are ideal for signal and power integrity applications as well as cable and filter testing.

Most 5G FR1 applications use frequencies between 3 and 5 GHz; while wireless LAN for WiFi-6 (802.11ax) uses the 6 GHz band. Debug trials in the design stage need to include the third harmonic, or frequencies up to 18 and 20 GHz. The Rohde & Schwarz instruments in the R&S ZNL/ZNLE family help meet the increasing demand for network analysis at these microwave frequencies and have an attractive price.

The light weight and small form factor make it easy to move the R&S ZNL/ZNLE between test stations or labs. The R&S ZNL also comes with an optional battery pack for field use. Users just push a button to switch on the instrument and start measuring with their R&S ZNL or R&S ZNLE. No external monitors, notebooks or additional software installations are needed.

The new R&S ZNL is ideal for commercial standards of 5 kHz and upwards and can also perform radiated emission measurements that include scans of up to 18 GHz in the time domain to measure voltage standing wave ratios. The R&S ZNL14 and R&S ZNLE14 cover all frequencies in the X band for commercial ground-based and airborne weather monitoring, air traffic control, military satellite transmissions, positioning and target identification.

The R&S ZNL-K14 option is included in the new 1.41 firmware release, expanding the R&S ZNL3, R&S ZNL4 and R&S ZNL6 functions with an internal CW signal generator for DUT stimulation using a continuous wave signal from port 1, while the frequency spectrum is analyzed at port 2. The R&S ZNLx‑B1 spectrum analysis option is required for this function.