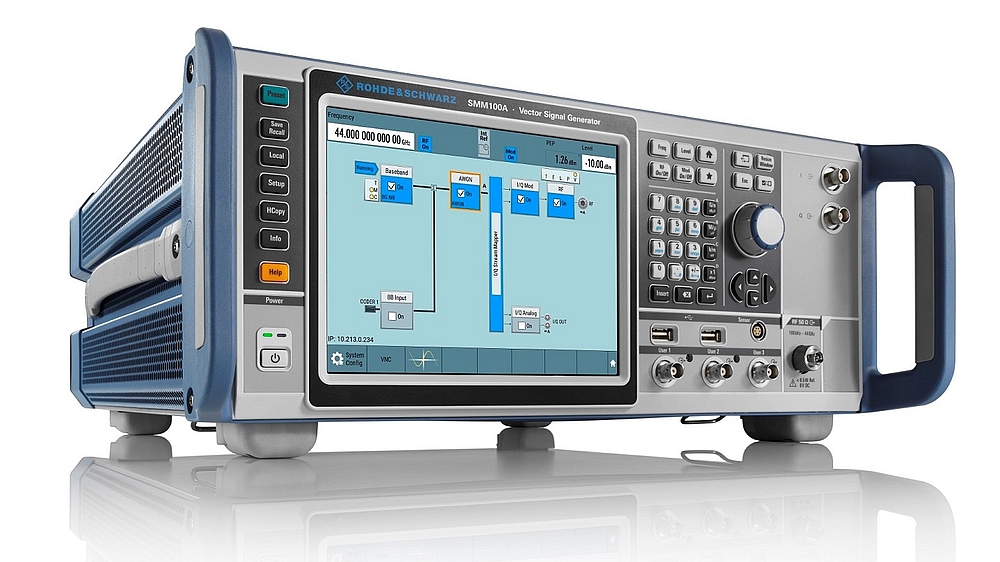 Offering a frequency range from 100 kHz to 44 GHz, the R&S SMM100A vector signal generator covers all bands used by wireless communication standards, including LTE and 5G NR, as well as the latest WLAN standards Wi-Fi 6 and Wi-Fi 6E (up to 7.125 GHz). Wireless transmission links such as Bluetooth are also supported.

With an RF modulation bandwidth of up to 1 GHz, this instrument meets, according to Rohde & Schwarz, the test requirements for devices operating according to the specifications of the most demanding wireless communication standards, such as the IEEE 802.15.4z Ultra-Wideband (HRP-UWB) standard.

The maximum output power of the R&S SMM100A generator is +18 dBm. This limits the need for external amplifiers.

The instrument includes in the same housing a generator with an integrated baseband unit to deliver real-time signals according to user-configured parameters, as well as an arbitrary generator whose waveforms are defined using R&S WinIQSIM2 software. Its memory depth reaches 2 GS for the generation of arbitrary signals sampled at a maximum rate of 1.2 GS/s. The multi-segment mode speeds up the test sequences in production.

The integrated SCPI macro recorder allows the creation of programs for remote control of the instrument. It is also possible to run Matlab or Python scripts. These scripts can be used on the R&S SMM100A generator as well as on most vector signal generators from Rohde & Schwarz.