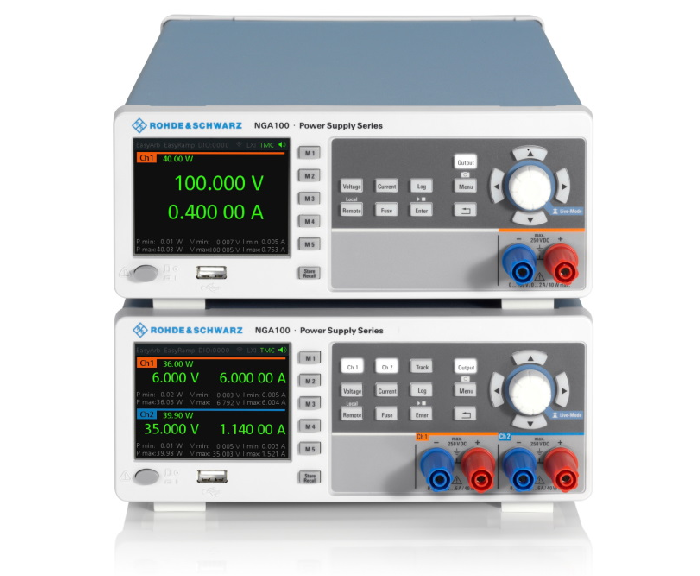 The linear regulation of the outputs of these power supplies provides a standard resolution of 1 mV / 100 µA. In the current range below 200 mA, the resolution is 1 µA. This resolution is, according to Rohde & Schwarz, suitable for the low current levels that are required, for example, for standby testing of IoT devices. The dynamic range of the R&S NGA100 power supply also makes it possible to handle the power and current peaks of these same devices when they are switched on.

These DC power supplies feature data logging, arbitrary waveform generation, integrated statistical calculation and remote sensing. Voltage and current values are recorded for later analysis at a rate of up to 10 samples per second. Statistical functions include the ability to display maximum, minimum and average power, voltage and current values on their 3.5″ QVGA display. The arbitrary generation mode allows voltage/current sequences to be generated with intervals of up to 10 ms.

The remote sensing function compensates for wiring losses between the output terminals of the power supply and the device under test, which is thus supplied at its input terminals with the required power level.

Data export and remote control of the power supply can be done via the standard built-in Ethernet and USB ports. A WLAN interface and external digital trigger inputs/outputs are also available as options.