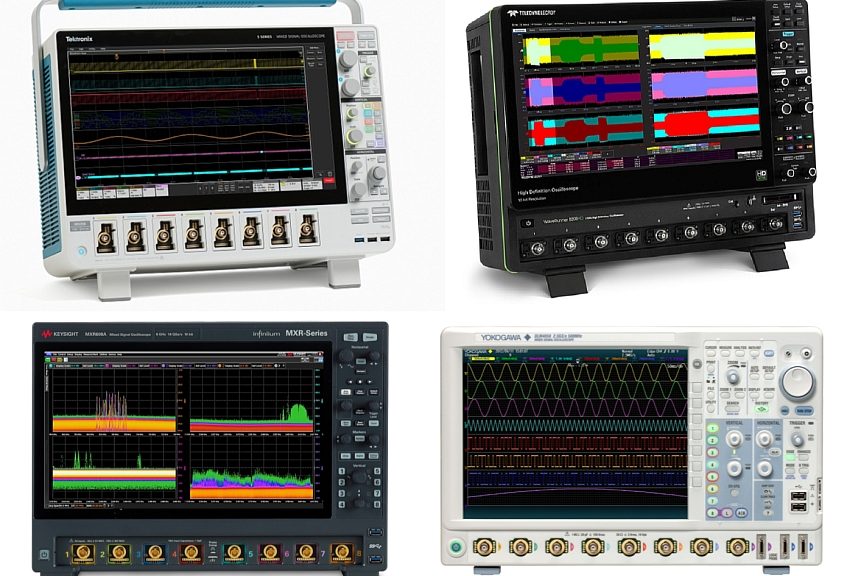 By launching its DLM4000 series in October 2012, Yokogawa was the first to integrate 8 analog inputs on an oscilloscope whose bandwidth was nevertheless limited to 500 MHz.

In September 2014, Teledyne Lecroy followed suit with its HDO8000 family of oscilloscopes that offered increased bandwidth (350 MHz, 500 MHz, and 1 GHz) and 12-bit resolution. The American manufacturer then announced the WaveRunner 8000HD range whose oscilloscopes combine 8 analog inputs digitized on 12 bits up to 2 GHz frequencies.

In June 2017, Tektronix introduced its first oscilloscopes with more than four analog inputs. The MSO 5 series oscilloscopes have 4, 6 or 8 analog inputs, depending on the model, each of which can accommodate an 8-channel digital probe. This makes it possible to combine up to 64 digital inputs on the same platform. Several frequency bands that can be upgraded after purchase are available from 350 MHz to 2 GHz.

In June 2019, Tektronix expands its oscilloscope offering by more than four channels with the launch of the MSO 4 series oscilloscopes with either 4 or 6 analog inputs. These FlexChannel analog inputs can each accommodate a probe with 8 digital channels, transforming each analog input into a digital input via an appropriate probe. Their scalable frequency band, depending on the model, extends from 200 MHz to 1.5 GHz.

On May 12, 2020, Keysight Technologies joined the club of oscilloscope vendors offering devices with more than 4 analog channels by announcing the Infiniium MXR-Series family. These oscilloscopes, equipped with 4 or 8 channels, cover a higher bandwidth (up to 6 GHz) than existing competitive models on the market. However, the resolution of the analog-to-digital converters is limited to 10 bits compared to 12 bits for Tektronix and Teledyne Lecroy oscilloscopes.

The 8-channel oscilloscopes on the market