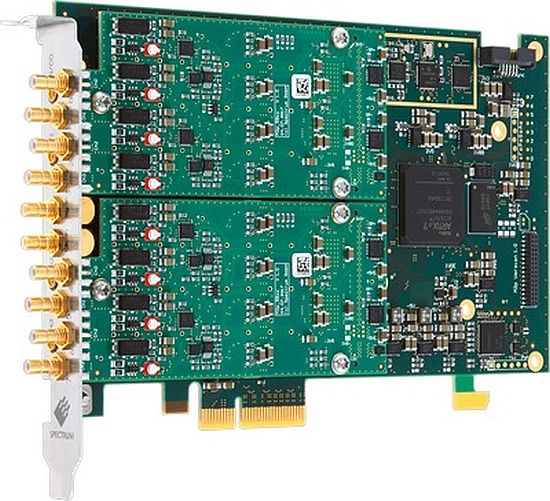 “These products will be the heart of a new mid-range digitizer series which is designed to cover signal frequencies from 1 MHz to 40 MHz. Within that range, the new units will smoothly replace all our current 12, 14 and 16-bit models,” said Oliver Rovini, CTO at Spectrum.

The M2p.59xx series is initially available with three different speed grades of 20 MS/s, 40 MS/s and 80 MS/s and from one to eight channels per card. More models will be released in 2018.

Although the size of the product has been squeezed into a half-length PCIe card, it still offers more features than predecessor families. Each channel has a separate ADC and a individual programmable input amplifier with ranges between ±200 mV and ±10 V, programmable input offset for unipolar measurements, programmable input termination of 50 Ohms and 1 MegaOhms and an integrated calibration circuit. Models are available with up to 8 single-ended and up to 4 differential channels.

16-bit PCIe digitizers
The reduced card length of 167 mm allows the 16-bit digitizers to fit into much smaller PC systems than before. A PCIe x4 lane interface increases the available streaming speed to more than 600 MByte/s – or more than 75 MS/s continuous streaming for 4 channels. That compliments the on-board memory of 1 GByte and enables applications that need continuous data storage or online calculations. Acquisition modes like multiple recording, gated sampling or ABA – the combination of fast and slow continuous acquisition – matches nearly every application demand.

Up to 16 cards in one system can be synchronized using Spectrum’s star-hub technology. That allows systems to be created with up to 128 channels, all sharing a common clock and trigger, in one single chassis. For synchronization with external equipment, clock and trigger inputs and outputs are standard. For even more flexibility, 4 individually programmable connectors are available directly on the front-plate that offer additional trigger inputs, status outputs, synchronous digital input lines, asynchronous I/O or a reference clock input for an integrated time stamping unit.

Software support
The new card is based on Spectrum’s own general driver API that was introduced in 2006. Nowadays more than 400 different products share this common driver library allowing switching from slow to fast products and combining PCIe, PXIe or Ethernet/LXI products with one common software interface. A SDK based on Windows and Linux is included in the delivery. Drivers and examples for nearly every programming language on the market are included. The current SDK includes C, C++, C#, Delphi, VB.NET, J#, Python, Java, LabVIEW, MATLAB and LabWindows/CVI.

All units are shipped factory tested and include a base version of Spectrum’s SBench 6 software for first tests and simple measurement tasks. The Professional license of the software adds full support of all acquisition modes, a large number of calculations and new displays, project control and reporting.

“More than 25 years of German quality engineering and production allowed us to give an five years of warranty on our products,” stated CEO Gisela Hassler. “Furthermore, software and firmware updates are free of charge for the lifetime of the product. Support is done directly by our skilled in-house team of engineers – normally within a couple of hours after the request.”