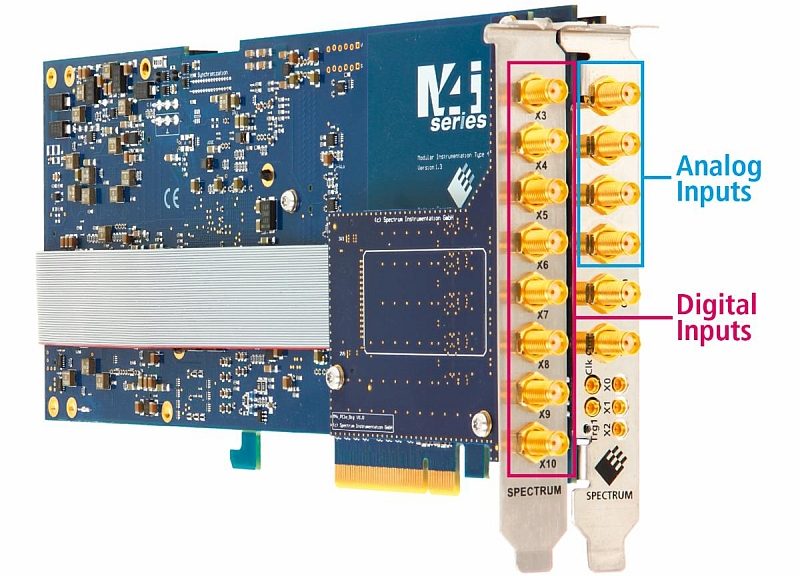 The Spectrum M4i.44xx series of PCIe digitizer cards consists of eight different models. Users can select from versions that have either two or four analog channels and sampling rates of 180 or 250 MS/s, with 16-bit resolution, or higher speeds of 400 or 500 MS/s, with 14-bit resolution. The digitizer cards of the “44” series are equipped with analog signal conditioning (6 input ranges, selectable input impedance, offset, etc.) and triggering capabilities. The acquired data can be stored in a 2 GSamples of on-board memory or transferred to a PC in a variety of memory read-out modes, including FIFO streaming, at rates up to 3.4 GB/s.

The new M4i.44xx-DigSMA digital input option has a separate PCIe faceplate, occupying an additional PCIe slot, with 8x SMA type connector. Each input has an impedance of 10 kOhms (to 3.3 V). This allows the inputs to handle 3.3 V LVTTL signals with input voltage levels between -0.5 V and +4.0 V. The digital input bandwidth is 125 MHz and software selection enables both synchronous and asynchronous acquisition modes.

For applications that require more channels, Spectrum enables multiple M4i.44xx series cards to be connected together with its Star-Hub system. Star-Hub permits a maximum of eight cards to all share a common clock and trigger. For instance, by connecting together three M4i.4451-x8 digitizers, two with the M4i.44xx-DigSMA digital option and one with the star-hub option, a single system can be made that has 12 analog and 16 digital channels.

The digitizers, and the digital input option, are supported by the Spectrum software development kit (SDK) which includes programming using C++, C#, VB.NET, Python, JAVA, LabVIEW or MATLAB. The SDK is included as standard with every unit along with a base version of Spectrum’s own software, SBench 6. This program lets users control all the modes and settings of the hardware via a user interface.