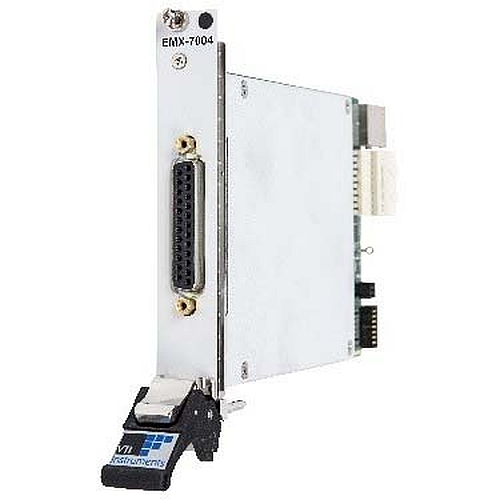 VTI Instruments EMX-70XX Series PXIe Programmable Resistor Modules allow the behavior of resistor-based equipment to be reproduced by controlling a series of relays that vary the resistance of each channel. They are designed to be deployed on applications such as RTD simulation as well as other resistance sensors, ATE calibration, potentiometer simulation, etc.

All EMX-70XX series modules are equipped with four independent channels of programmable resistors, with four decades per channel. Each channel is equipped with its own sense leads for feedback.

Two or four channels can be connected together and programmed to function as a potentiometer. These modules can operate in parallel and in series. Connecting two or more channels in parallel increases accuracy and reduces step size. Their connection in series increases the resistance range.

The EMX-7004 module has an accuracy of up to ±0.02% of the programmed value ±0.5 Ω for any resistance value between 1 Ω and 16.383 Ω. It can be adjusted in increments of 1 Ω, either via the software application programming interface (API) or via the supplied software front panel.