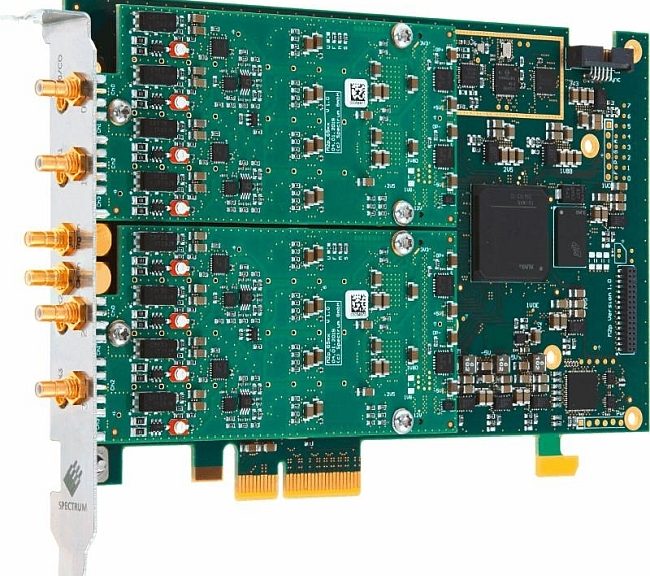 The “65” series cards have a standard 512 MS on-board memory for storing and replaying waveforms for automated test applications using signals in the DC to 60 MHz frequency range.

Based on the PCIe-x4 platform, these AWGs (Arbitrary waveform generators) offer 700 MB/s of FIFO streaming speed. This allows a large number of separate test signals to be replayed on many channels to recreate conditions encountered in the real environment.

“This family of AWG cards has a noise level that is more than 20% lower than our previous AWG series,” says Oliver Rovini, CTO of Spectrum. “In addition, these cards have a 16-bit resolution and a clock twenty times more accurate at only ±1 ppm.”

“The application program interface (API) of our cards, which are guaranteed for 5 years, is identical for all our products, protecting the investment in test program development,” said Gisela Hassler, CEO of Spectrum.

For applications combining AWG and digitizers, Spectrum’s Star-Hub module synchronizes up to 16 cards from the M2p range. The new AWG M2p.65xx matches the 16-bit M2p.59xx digitizers launched in 2018 with eight channels sampled between 20 MS/s and 125 MS/s. The Star-Hub module distributes a common clock and all trigger signals to each board to ensure synchronous operation.

The cards are programmable and the drivers are provided free of charge to support the most common languages (C++, VB.NET, C#, J#, Delphi, Java or Python) as well as third-party software tools such as Labview and Matlab. Spectrum’s SBench 6 Professional control software, supplied with the boards, can also be used for configuration and signal generation.

The signal outputs of the AWG boards as well as the clock and trigger inputs are provided via SMB connectors on the front panel. The front panel also hosts four multifunction MMCX connectors, which can be used for different tasks such as additional digital output channels (marker channels), clock, trigger or status output as well as asynchronous I/O lines. This connectivity allows the AWG cards to be adapted into most automated test system environments.