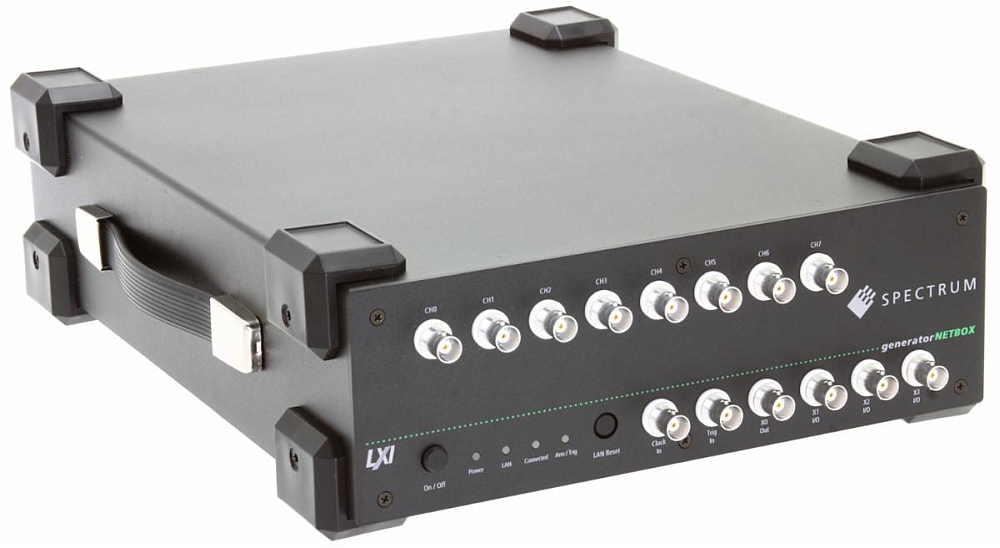 The instruments connect via Gbit Ethernet to PCs or computer networks to be controlled by LXI technology. Their weight of 6.3 kg makes them portable. They can therefore be rack-mounted on a test bench or used for mobile applications (when equipped with an optional 12 or 24 V DC power supply).

An integrated server option (DN2.xxx-Emb) is available for applications where the generator needs to operate remotely. This option combines a CPU, a freely accessible SSD, more memory and remote software access. This provides an open platform where the user can run his own software and still be connected via LAN for remote access. This option allows the generator to run independently or, when connected to a LAN, to run on its own.

For waveform generation, each channel has its own 16-bit digital-to-analog converter (DAC) and its own output stage. The channels share a common clock and trigger to ensure synchronization, and the output stages incorporate four switchable filter paths to optimize signal quality. All models offer the ability to produce waveforms with amplitude variations of up to ±12 V at 1 MOhm impedance or ±6 V at 50 Ohms.

These AWGs can generate signals in the frequency range from DC to 60 MHz. They incorporate functions that allow a variety of test and control signals to be created. For example, the units incorporate up to 2 x 512 MS memory that can be used in a number of operating modes, allowing the generation of long and complex waveforms: Single-Shot, Loop, FIFO, Gated and Sequence Replay modes. In FIFO mode, the instruments can stream data over the Gbit Ethernet port from the PC memory to the AWG memory. Signals can even be generated while new waveform data is loaded into the on-board memory.

The instruments come standard with Spectrum’s SBench 6 Professional software. SBench 6 allows the user to control all AWG modes and settings via a software interface. The software supports multi-channel operation and has a variety of built-in functions for waveform display, signal generation, data analysis and documentation. Basic signals can be created using the EasyGenerator function, which produces waveforms such as sine, triangle or rectangle with programmable frequency, amplitude and phase. More complex signals can be created using mathematical equations or by importing data from other programs or devices (such as digitizers or oscilloscopes) in binary, ASCII or Waveform format.

The generatorNetbox modules are programmable and drivers are provided free of charge to support the most popular programming languages (such as C++, VB.NET, C#, J#, Delphi, Java or Python code) as well as third-party software tools such as Labview and Matlab.