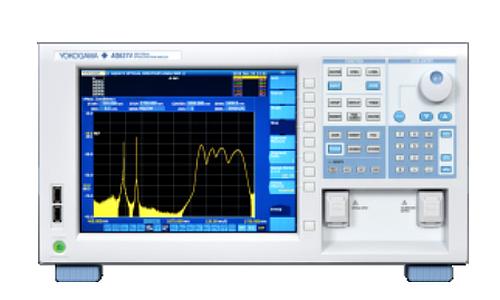 Consequently, institutes that conduct basic optical technology research, manufacturers of broadband light sources, and manufacturers of optical devices used in a variety of fields have had to use more than one optical spectrum analyzer or construct their own measurement system from a spectroscope and other components.

To satisfy such needs, Yokogawa has developed the AQ6374 offerint a 350 to 1750 nm wavelength range. The AQ6374 is capable of evaluating and analyzing both the visible light wavelengths and the wavelengths used in optical communications. With a maximum resolution of 2 pm and the ability to sample power levels at up to 100,000 wavelength points, the AQ6374 can evaluate and analyze a wide range of wavelengths with a single scan.

The AQ6374 also features a wide close-in dynamic range of 60 dB, which is sufficient for measuring the side mode characteristics of a semiconductor laser. This instrument can thus be used to develop distributed semiconductor devices such as feedback laser diodes (DFB-LD) that emit only one wavelength as well as optical fibers that necessitate measurements over a wide range of wavelengths.
The AQ6374 comes with two additional enhancements. The first is a function that purges the water vapor trapped in its monochromator that can suppress the absorption of light at certain wavelengths. The second is a function that reduces the effect of high-order diffracted light whose wavelengths are 2–3 times that of incident light, a characteristic that all monochromators have due to their design principle.