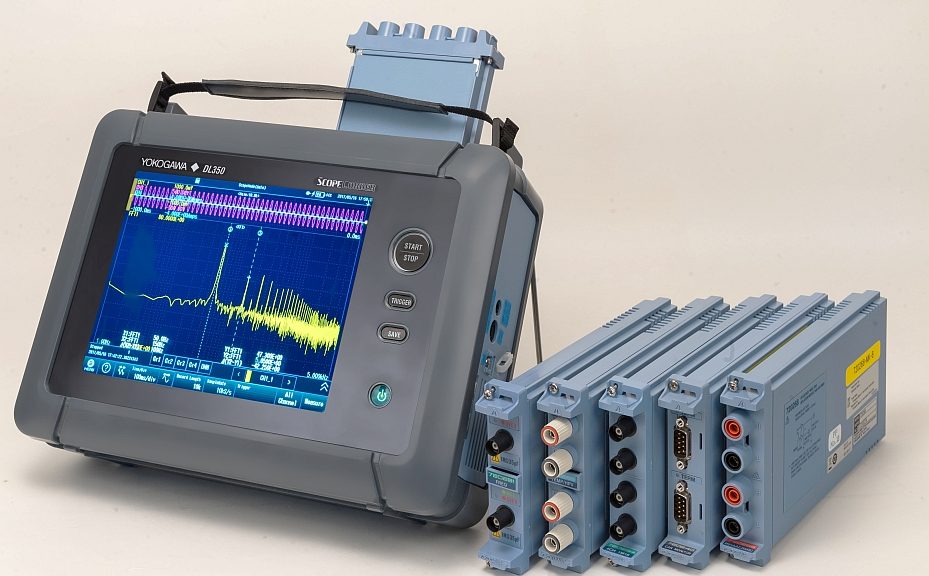 The Yokogawa DL350 ScopeCorder is a portable measuring instrument for capturing, displaying, recording and analyzing a variety of electrical and physical parameters in several industry sectors.

Like other models in Yokogawa’s ScopeCorder family, the DL350 combines features of a general-purpose oscilloscope and those of a data acquisition recorder in a single, portable instrument.

The key feature of the DL350 ScopeCorder is its plug-in modularity, which allows it to be configured to suit a variety of user applications. Whether carrying out straightforward high-precision voltage measurements or handling a blend of signals coming from such things as current probes, temperature sensors, strain gauges, accelerometers and serial buses, the DL350 can deliver, without extra boxes or cables.

8 user-swappable input modules
This flexible input capability is achieved by incorporating two slots which are populated with any of 18 different types of user-swappable input modules. This means, for example, that four isolated 16-bit voltage inputs can be measured at speeds of one megasample per second (MS/s) alongside 16 temperatures or two separate CAN or LIN buses each containing 60 signals. Changing a single module enables measurement at 100 MS/s with 12 bits and 1 kV of isolation. Meanwhile there are 16 logic inputs always available, with even more available by swapping a further module. Among other modules are AC measurements using an RMS module in real time and a mathematics channel for signal processing and analysis after the recording is finished. The DL350 offers compatibility with many existing ScopeCorder input modules.

Scope and recorder modes
For users who are more familiar with chart recorders than with long-memory oscilloscopes, the DL350 offers a choice of operating modes. Recorder mode is suitable for long-term, continuous recording for a specific duration and where the sampling interval is specified.
Scope mode allows the DL350 to be used just like an oscilloscope with all the associated benefits, including triggering and flexible memory use. Using the history memory enables up to 1000 separate triggered acquisitions to be captured to the internal memory.

Up to 5 Gpoints of data per module can be recorded directly to an SD card. This means that the DL350 can be used for continuous recording up to 50 days. For high-speed signals, up to 100 Mpoints per module of internal memory is available to capture fast transients.

An high-resolution, high-speed sampling module provides individually isolated 12-bit, 100 MS/s inputs, which can measure and record transient waveforms (superimposed on inverter outputs, for example) and the edges of control signals.

Autonomy of operation
The user has a choice of a simple level trigger or enhanced triggers on such things as pulse width, waveform period and across multiple channels. For example, the wave window trigger is ideal for AC power-line monitoring, and enables voltage sags, surges, spikes, phase shifts or drop-outs to be easily captured (available for 40 to 1000 Hz waveforms).

A DL350 can be left unattended with the captured waveform automatically saved to a file, or a notification email sent if and when it triggers.

The sampling clock, trigger and start/stop controls are all available as external signals, so that a rotary angle encoder or degree wheel, for example, can be used as the sample clock to analyze engine rotation and performance.

The power in single and 3-phase systems can be evaluated. In addition, for fundamental waveforms of 50 or 60 Hz, up to 40 harmonic orders can be analyzed. Alternatively, it is possible to use the suite of FFT functions to perform full frequency analysis.

The DL350 with its 8.4-inch resistive touch screen is based on an A4-sized chassis and weighs less than 2.6 kg excluding battery and under 4 kg when populated with a battery and 2 x 4 channel modules. The built-in rechargeable battery provides three hours of continuous operation which, when combined with either mains or 10-30 V DC power.