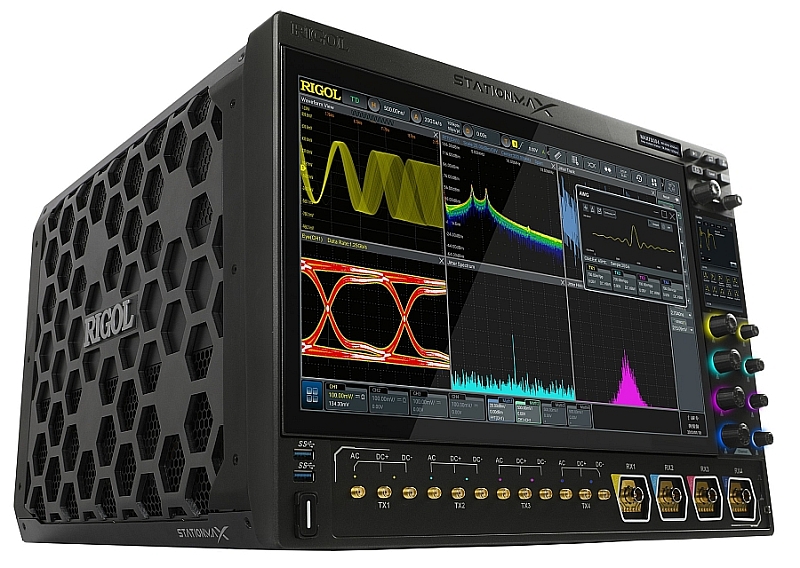 Since its creation in 1998, Rigol has gradually built up a large catalog of electronic test and measurement instruments. The Chinese manufacturer has first focused on entry-level instruments by offering oscilloscopes, generators, multimeters or power supplies targeting in priority the most common laboratory applications not requiring high level measurement capabilities.

Rigol has further strengthened its offer with instruments with increased performance such as its recent MSO8000 oscilloscopes for mixed signal acquisition up to 2 GHz, the RSA5000 family of real-time spectrum analyzers with up to 6.5 GHz bandwidth or the DSG3000B series RF signal generators covering a frequency range up to 13.6 GHz.

By announcing its StationMax, the manufacturer shows this time a certain originality. Although there are solutions on the market that combine several analog inputs/outputs on the same platform, they are generally modular systems, in PXI format for example, which bring together various signal acquisition and generation boards in the same chassis. These modular systems, driven by a PC and via a screen (remote or integrated in the chassis) have the merit of leaving the user the choice of the cards that compose them as well as the control computer. However, this flexibility requires a certain amount of integration and implementation effort on the part of the users.

This instrument uses Rigol’s Phoenix integrated circuit set as well as the data analysis and signal synthesis technologies developed by the manufacturer. Various measurement and analysis functions are software definable so that the user can adapt the test capabilities of the instrument to the specificities of his application.