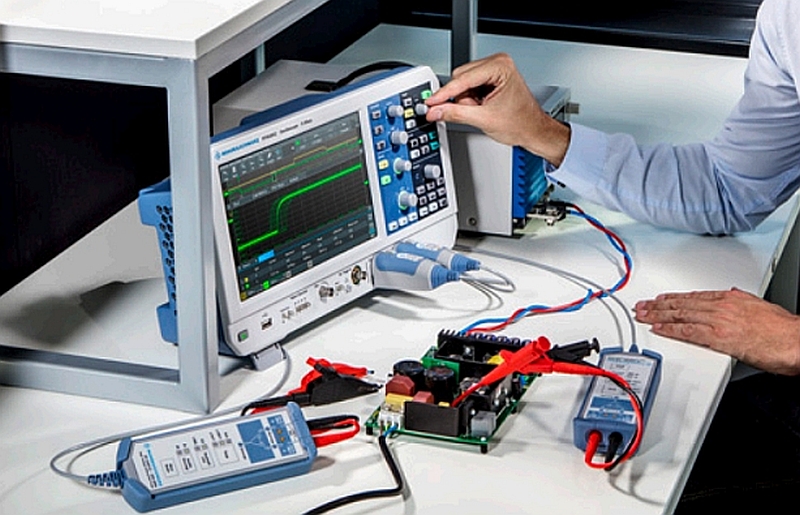 – The MDO-2000A family of GW Instek is an evolution of the MDO-2000E series two-channel oscilloscopes. Their maximum bandwidth is increased to 300MHz.

– The DS1202Z-E series entry-level oscilloscopes, equipped with a 7-inch display, offer a bandwidth of up to 200MHz.

– Teledyne LeCroy offers the WaveSurfer 4000HD range of High Definition (HDO) oscilloscopes with 12-bit vertical resolution. Featuring a 12.1 inches touch screen, these scopes have bandwidths ranging from 200 MHz to 1 GHz and sampling rates up to 5 GS/s, depending on the model.

– Teledyne LeCroy is expanding its range of high definition oscilloscopes with the WaveRunner 8000HD model equipped with 8 digital inputs on 12 bits.

– Tektronix has extended its range of high-performance oscilloscopes of the DPO70000SX series with two models of 13 GHz and 16 GHz.

– Tektronix’s range of MSO Series 4 oscilloscopes share the same scalable platform in terms of functions and bandwidth with their MSO 5 and MSO 6 predecessors. Depending on the models, they have a scalable bandwidth from 200 MHz to 1.5 GHz. They are equipped with 4 or 6 analog inputs, each of which can accommodate an 8-channel digital probe.

– The Tektronix MDO Series 3 family of oscilloscopes incorporates the MDO3000 and MDO4000 concept with a touch of modernity and scalability. They can combine in the same instrument 2 to 4 analog channels (100 MHz to 1 GHz depending on the model), one RF channel (1 or 3 GHz) and 16 digital inputs.

– Teledyne LeCroy launched oscilloscopes from the WaveRunner 9000 series, equipped with 4 analog channels, 16 digital inputs (optional) and a 15.4″ touch screen. Several models are available with a bandwidth from 500 MHz to 4 GHz. The maximum sampling rate can reach up to 40 GS/s.

– Pico Technology has launched the 9404 oscilloscope module with four channels covering a frequency band up to 5 GHz and which can sample signals in real time or equivalent.